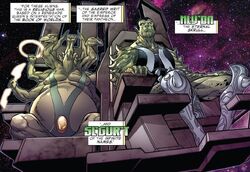 Base of Operations
Skrull Dreamtime
Affiliations

Origin
Pantheon assembled from the last Skrull Eternal and of her Deviant Skrull former opponent.

Millions of years ago, at the conclusion of the Skrull civil war between the three sub-species (Deviant Skrulls, Prime Skrulls, and Eternal Skrulls), after the Prime Skrulls had been exterminated, Sl'gur't the warrior queen of the Deviant Skrulls led her people against the last Eternal Skrull stronghold. When she found the last Eternal Skrull (Kly'bn) who was kneeling at an altar, he persuaded her not to kill him but to let him be their guide and proclaimed his love for her. The two were elevated to godhood because of the truth of his words.[3]

It has not been revealed if there were already Skrull gods before the two or if such gods (e.g. the Skrull Goddess of Love - Zorr'Kiri) came afterwards, and under which circumstances.

The two of them indirectly supported the creation and expansion of the Skrull Empire. They conquered and enslaved the pantheons of the conquered races, numbering nearly 1000 pantheons.[1][3]

During the Secret Invasion, the enslaved army of alien gods battled Earth's God Squad.[5] Afterwards Kly'bn and Sl'gur't did battle with them and both were slain. Taking the place of the Skrull gods was the Chaos King who, in the form of Sl'gur't, had killed Sl'gur't who in turn was in the form of Amatsu-Mikaboshi (the Chaos King).[3] When the Chaos King later waged war against the other gods in the Chaos War, Kly'bn was one of the dead gods in her army.[6]

Retrieved from "https://marvel.fandom.com/wiki/Skrull_Pantheon_(Earth-616)?oldid=5255429"
Community content is available under CC-BY-SA unless otherwise noted.