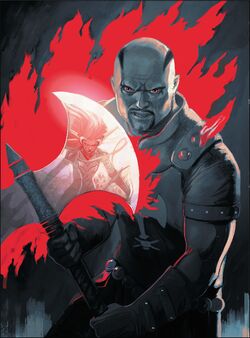 And though the Executioner stands alone, and the warriors of Hel seem numberless, not one sets foot upon the bridge across the river Gjoll. They sing no songs in Hel... nor do they celebrate heroes... for silent is that dismal realm and cheerless... but the story of the Gjallerbru and the god who defended it is whispered across the Nine Worlds. And when a new arrival asks about the one to whom even Hela bows her head... the answer is always the same... he stood alone at Gjallerbru... and that answer is enough.

Skurge the Executioner was one of Asgard's greatest warriors. He was born the illegitimate son of a Storm Giant and an Asgardian from the realm of Skornheim. Later he became a warrior, gaining the name Executioner after fighting in a war against the Storm Giants. He came to Asgard, there he was seduced by Amora the Enchantress into assisting her in many of her schemes over the years. But while the Executioner was as so infatuated with the Enchantress that he would do anything for her, she continually withheld her favors from him to keep him in thrall.[citation needed]

In his first encounter with Thor after he gained his human identity of Don Blake, Enchantress attempted unsuccessfully to seduce Blake, and then ordered the Executioner to dispose of Jane Foster, the mortal woman Thor then loved.[4] Thor saved Foster and defeated both the Enchantress and Executioner.[5]

In the following years, the Enchantress and Skurge also allied themselves with Loki. He sent them to Midgard to attack Jane Foster. A small group of local citizens briefly tried to help her, but they were subdued by a sleeping spell from the Enchantress. Balder the Brave arrived atop the Baxter Building, and quickly found and challenged the villainous pair.[6] Balder managed to hold his own, however, it's not until the timely arrival of Thor do the two villains released Jane and flee the scene. Leaving Jane in Balder's care.[7]

Skurge, under orders from Amora, joined Baron Zemo's Masters of Evil. Together they recruited Radioactive Man, Melter, and Black Knight. Their scheme to turn Thor against the other Avengers failed,[2] as did their plan to use Wonder Man as a pawn to try and gain their trust.[8] The team also assisted by Immortus.[9][10] Finally, Zemo had his Asgardian allies free Black Knight and The Melter from jail (though Radioactive Man had been deported to his native China.) While his Masters battled the Avengers, Zemo had captured Rick Jones, then acting as Captain America's partner. Cap and Zemo dueled in South America. Blinded by the glare from his opponent's shield, Zemo fired his death ray wildly and died in the ensuing rockslide.[11] Meanwhile, the remaining members were defeated by the Avengers after Thor transported them to another dimension so their battle would not destroy the city of New York.[12] He joined them on various crimes.[13][14][15]

Skurge and Amora joined the Mandarin's attempt to conquer the world. He attacked the Asian sub-continent with an army of Trolls to retrieve the natural diamond deposits. Skurge battled the Olympian hero Hercules in another dimension he had transported them to with his axe, but was beaten and thrown at a giant, Amora had created to take down the Scarlet Witch. The giant was destroyed in the process.[16]

Skurge along with Amora captured Bruce Banner when he was transported to Asgard. When Banner revived, he turned into the Hulk and fought Skurge. Skurge struck him with his Bloodaxe, but this proved ineffective against the Hulk. The Hulk managed to stagger his foe with one crushing blow to the jaw. Amora grew bored watching the two combatants fight one another and teleported herself and Skurge to a safe distance. Amora called together a massive army of Rock Trolls and led them on a quest to overtake Asgard. The Hulk got involved in the fight, and kept the trolls at bay by sealing them inside of a rocky cavern. Enraged, Amora turned her magic against the Hulk and killed him. However Odin used his Scepter of Strength to bring the Hulk back to life. [17]

Skurge and Amora were banished by Odin to a barren nether world. There, Skurge abandoned Amora for the mysterious woman named Casiolena who appeared to offer Skurge her love. Feeling betrayed, the Enchantress vowed revenge on all men and used the Valkyrie disguise and the formation of the Liberators to met this end.[18] Skurge battled the Defenders when they were transported to a mystical realm. Dr. Strange and Namor were then overpowered by Skurge and an army at his command. Locked in the same cell with Bruce Banner and Barbara Norriss. Also imprisoned were the Enchantress and the Black Knight. Amora explained that after her last battle with the Avengers she and the Executioner travelled to this realm and the Executioner soon became the consort of the queen Casiolena, much to Enchantress' chagrin. Amora with the help of Defenders managed to free themselves. In the heat of battle, Skurge killed Casiolena, and Amora reclaimed the Executioner as her own. However, when the Black Knight revolted believing that the Enchantress loved him, she informed him that he was only a pawn in her game, and turned him into stone.[19] Amora escaped leaving with Skurge.[20]

In Asgard, the council of war planned their moves, when Karnilla the Norn Queen called Balder to the gate. However the Enchantress and the Executioner broke down the door.[21] They told Balder to surrender or be destroyed.[22] Balder disguised himself to sneak out and try to determine the strength of the enemy army. He sneaked into their encampment and discovered that the suits of armor are empty, brought to life by the Enchantress. Balder is discovered by the Enchantress and Executioner. Balder fought the Executioner, but Enchantress secretly lends him sorcerers aid. Karnilla came to Balder's rescue. She and the Enchantress engage in a battle of sorcery, while Balder fights the Executioner. After defeating them, Balder and Karnilla are confronted by an angry Thor.[23] After finally arriving home, Thor found Enchantress and the Executioner, and on the throne was Loki himself.[24] Loki now ruled Asgard in Odin's stead with Enchantress and the Executioner as his Loki's lieutenants. By his own royal decree contained in the Cask of Sovereignty, even Thor must obey him. Loki knows that he must dispose of Odin if he wants to keep the throne. Loki then reveals that he was behind the empty army, and that Kroda was the second Thor, and that the document from the Cask was a forgery. The Enchantress and Executioner steal the sleeping form of Odin. Sif, Thor, and Recorder head to Karnilla's domain to find Balder, while the Warriors Three are charged to protect Odin. Thor's group were then assaulted by two Storm Giants, but Thor defeats them both. When they arrive, Karnilla tells them that Balder did not come back with her. The Warriors Three find the Enchantress and Executioner, but before they can be forced to talk, the Enchantress trips over Hogun's dagger, causing them both to fall into the fire pits. A dagger which Loki mystically caused to be moved into her way. Thor then stormed into the Royal Throne room, demanding to know where Balder was. Loki then disappeared and the Destroyer came crashing through the wall.[25]

After feeling toyed with by Amora for too long, Skurge teamed up with the Einherjar, Balder, and Thor to rescue stolen souls from Hel that had been taken by Hela. In the process, Hela attempted to persuade Skurge to join her warriors onboard of Naglfar, the ship of the dead. One of her minions used an illusion of Amora to sway him, but when this treachery was revealed, Skurge used his axe to cleave a dimensional rift into the heart of a sun right beside Naglfar, destroying both the ship and the axe in the process.

After they had retrieved the human souls, the band was pursued by a huge army of the dead. When Thor volunteered to buy time for the other's escape, Skurge knocked him out from behind, and volunteered to hold the bridge of Gjallerbru in his stead. Skurge defended the bridge with a pair of M16's from Earth and unbreakable courage, and none of his opponents set foot on Gjallerbru. He stood alone and died at Gjallerbru, allowing not one of the almost numberless hoard to set foot upon the bridge for as long as he could fight. For this heroic last stand, Skurge found a place among the warriors residing in Valhalla, and to the surprise of many, Amora found herself torn with remorse upon hearing of his demise.[26]

When Lorelei died and Hela came for her, Skurge offered Amora the chance to take her place so that they could be together, but she refused. Amora later gave Skurge's axe to a mortal called Brute Benhurst. Thor believed him to be Skurge as he wore a mask. He tried not to fight him until the Executioner hit Kevin Masterson, son of Eric Masterson. Thor realized it could not be him as Skurge would never hurt an unnamed person. He easily defeated Brute Benhurst.[27] Skurge's spirit was freed from Valhalla again when he led the other escaped Einherjar to join an assault on Hela's forces by the Asgardians and New Mutants.[28][29]

When Odin's secret long-lost firstborn Angela set her sights on overthrowing Hela, Skurge joined forces with the Odinsons Balder and Tyr in an attempt to quelch the rebellion,[30] but they failed and were defeated.[31] Angela became the new Queen of Hel after defeating Hela in combat. However, since she only wanted to use that power to set free the spirit of her lover Sera, she abdicated as soon as her true goal was achieved. She handed over the crown to Balder, and he became Hel's new regent.[32]

Not long afterwards, Niffleheim became the target of Muspelheim's new ruler, Sindr the Queen of Cinders, as part of an alliance between her realm and Malekith the Accursed during the War of the Realms.[33] Skurge helped Balder's resistance, but as the war marched on, they were overpowered.[34] With Thor and Loki's help, Sindr's forces were defeated.[35]

When the incarnation of Loki known as Kid Loki set out to secure the Naglfar Beacon to use it in the War of Realms, he assembled a group of Asgardian misfits that became known as the Asgardians of the Galaxy.[36] Loki tricked Skurge into joining his cause, disguising himself as the Enchantress to recruit Skurge and free him from Hel. Even though Loki, as the Enchantress, promised a merciful new existence, Skurge was disappointed that his new lease on life was as violent as his last.[37]

During the War of the Realms, the Asgardians of the Galaxy fought to defend the Earth from an invading force led by Malekith the Accursed. While fighting off the Angels of Heven in Africa, Skurge was fatally injured. With his final strength, Skurge helped Angela in her plan to draw the Angels back to Heven by opening a portal to this realm using his Bloodaxe. Once there, Angela called upon the Naglfar Armada to attack Heven. Most of the Angels retreated to attend to the attack, and attacked Skurge as well. He succumbed to their attacks while holding the portal to Heven, and eventually died. To his surprise, Skurge was transported to Valhalla for his afterlife.[38]

Skurge was a formidable hand to hand combatant and was particularly adept at wielding a battle-axe in combat situations.[39]

Superhuman class 65. Skurge is significantly stronger than the average Asgardian who can lift 35 tons.[39]

The Bloodaxe, and various conventional weapons.[4][41]

Like this? Let us know!
Retrieved from "https://marvel.fandom.com/wiki/Skurge_(Earth-616)?oldid=6483138"
Community content is available under CC-BY-SA unless otherwise noted.