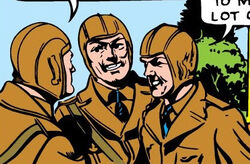 The Sky Devils were a group of soldiers who joined up with the Allied Forces in the 1940's during World War II. They consisted of war hero Captain K-4, French fighter ace Lt. Rene D'Auvergne, and British actor turned soldier Lt. Ronald Wolverstone-Clodd. During the course of the war, there are three recorded adventures of the Sky Devils.

In their first recorded adventure, they came to the rescue of a Allied fighter plane attacked by Luftwaffe fighters. Later, K-4 infiltrated a Nazi ammo base and set it to explode. Being discovered, K-4 managed to set off the explosions and was rescued by Rene and Ronald.[1] Later, the Sky-Devils were assigned to track down a zeppelin that managed to bomb London near the Thames River. They infiltrated its hidden air base and learn its next target was Paris, France. K-4 personally took the zeppelin down before it could complete its next mission.[2] In their final recorded mission, Rene and Ronald were sent to photograph a Nazi air and marine base only to be captured. Learning that the Nazis were planning an attack, they broke out and warned K-4 who led an Allied surprise attack and decimated the base, rescuing his comrades before they could be killed by the Nazis,[3]

In the early days of the year 1940, the Sky-Devils were assigned by Captain Samuel Sawyer to fly Nick Fury and Red Hargrove into Nazi Germany to assist Nazi scientist Abraham Erskine flee to the United States.[4] In the summer of 1940, they were assigned to aid Fury and Hargrove in attacking secret Nazi fortresses. In one of their raids, they destroyed a Nazi lab in Frankfurt, Germany. It not only further frustrated Nazi efforts to create a Super-Soldier Serum but also freed World War I hero John Steele from stasis.[5] Later, in the fall of that year, Steele joined the Sky-Devils, Fury, and Hargrove in attacking Nazi operations across Germany.[6] After witnessing a massacre of villagers in early 1941 -- including women and children -- caused by the Red Skull, the Sky-Devils were ordered to return to Britain, leaving John Steele behind to continue fighting Nazi forces alone.[7] Of these covert missions in Nazi Germany, it is unknown which members of the Sky-Devils were involved in these missions.

The Sky Devil's subsequent activities during the war remain unrevealed.

Retrieved from "https://marvel.fandom.com/wiki/Sky-Devils_(Earth-616)?oldid=5629425"
Community content is available under CC-BY-SA unless otherwise noted.