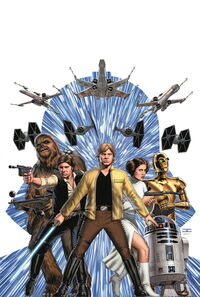 Han Solo, Chewbacca, Leia, R2D2, C3PO and Luke Skywalker travel to Cymoon posing as an emissary of Jabba The Hutt to negotiate for raw materials. In fact, they are there to commit sabotage of Empire infrastructure. While Han plants the explosives, Luke discovers many individuals who have been imprisoned by Empire forces to be used as slaves. Luke frees the ‘slaves’ and proceeds to head back to The Millennium Falcon to make good their escape. Meanwhile an Empire shuttle arrives on Cymoon carrying the ‘negotiator’ who in fact turns out to be Darth Vader. Chewbacca seeing the new arrival from his concealed position tries to take Vader out with a volley of blaster fire, which Vader is easily able to deflect using two Stormtroopers as a shield. A general melee breaks out as Han and company try to make good their escape. As Luke makes his way back to the rendezvous point, he comes face to face to Darth Vader himself.

Princess Leia is leading a covert operation to attack Empire infrastructure on Cymoon 1 which is said to be the largest weapons manufacturing facility in the entire Empire. During the operation, Luke stumbles upon a group of prisoners set to be enslaved. Luke releases them and heads back to the rendezvous with the Millennium Falcon. On the way, he encounters Darth Vader who has arrived on Cymoon 1 in response to the Rebel operation. Luke tries to take on Vader in a light sabre duel. During the fight, Vader disarms Luke of his light sabre; a sabre he appears to recognise. Before he can do anything, the huge leg of an AT-AT crashes through the ceiling. The AT-AT is being piloted by Leia and Han. The distraction gives an opportunity to try and escape with the freed slaves. The situation becomes desperate with the escapees being cut down by Empire forces. Han, still piloting the AT-AT tries to relieve the situation. Back at the Falcon, C3-PO encounters some ‘locals’ who seem intent to try and dismantle the Falcon for salvage. C3-PO whilst trying to surrender, is blasted. Back at the factory, the fight continues. Luke commandeers a speeder bike to try and make it back to Leia and Han which piques the interest of Vader who figures he might have been “too hasty” in dismissing Luke’s crude ability in the use of the force during their duel. The AT-AT bears down on Vader with Han trying to use it to crush Vader. Vader is able to use the force on the AT-AT to deflect the machine’s leg. R2-D2, who has been trying to repair the AT-AT’s blasters, finally gets them online whereupon Han lets loose on Vader. The resulting conflagration causes Vader to release his hold on the AT-AT and allows Luke others to put some distance between themselves and the Imperial forces. Vader recovers from the blast. He receives a report from facility overseer Agaadeen that the facility power core is approaching a meltdown. Vader refuses his request to abandon the facility ordering the rebels to be stopped at all costs, remarking that he will take care of Luke personally.

The small covert rebel raid led by Princess Leia against the Empire weapons facility Cymoon 1 continues. The facility power core has been damaged to the extent that it is approaching melt down. Leia and Han, in a captured AT-AT, are battling through Empire forces to try and rendezvous with the Millennium Falcon to try and make good their escape. Luke, trying to make good his escape on a stolen speeder cycle, has caught the attention of Darth Vader who arrived on Cymoon 1 in response to the rebel raid. Meanwhile, back at the Falcon, C3PO, who has been captured by local scavengers and partially dismembered, is rescued by Chewbacca who has been part of the raid also. Vader manages to catch up with Han and Leia and proceeds to disable the walker by severing its ‘feet’ using his lightsaber. Vader also receives news from Overseer Agaadeen that the melt down has been averted. As imperial forces move in for the kill, Luke arrives on the speeder bike and proceeds to cut through the Stormtroopers giving Han and Leia the opportunity of escaping from the downed walker. Luke, realising that the facility should have blown by now, disobeys Leia’s order to abandon the speeder and return to the Falcon. Instead he heads back to the weapons facility to finish what they came to do. Han & Leia manage to return to the Falcon, where they ready the ship for departure. Luke arrives back at the weapons facility and manages to damage the core so that a meltdown is impossible to reverse. Only then does he make his way back to the Falcon; which he does in the nick of time, as the facility blows. Vader sees the Falcon leave Cymoon 1 as he emerges from what is left of the factory. Realising that the late Obi-Wan Kenobi has begun Luke’s training in the force: he recognised the lightsaber that Luke was using, he vows to turn Luke to the dark side. He has no idea at this stage, that the young rebel is his son. Han manages to avoid the imperial blockade of the planet and hits the hyperdrive of the Falcon to escape completely. Despite the success of their mission, Luke is despondent that he didn’t make more of his encounter with Darth Vader and doubts that he has what it takes to be a Jedi. The story switches to Tatooine, where two unknown characters deliver a package to Kenobi’s former home on the planet. The package is just labelled with the words “For Luke”…

It has been a while since the rebel raid on the Imperial Weapons factory on Cymoon 1. Darth Vader has travelled to Tatooine to see Jabba the Hutt demanding that his organisation supply goods to the Empire to offset the losses caused by rebel activity. He is also interested in what Jabba knows about Obi-Wan Kenobi’s time on Tatooine. Jabba tells him that Kenobi had been training a “young boy” to be a Jedi. Vader tells Jabba that the Jedi are “no more.” At the rebel fleet, Han and Chewbacca effect repairs to the Millennium Falcon, whilst Leia meets with Mon Mothma and the rest of the Rebel leadership to try and persuade them to step up the campaign against the Empire. Luke still harbours doubts about his future within the rebellion and his prospects of successfully training as a Jedi given his encounter with Vader on Cymoon 1. Leia tries to reassure him but he remains unconvinced. Luke decides that he has to take his leave of the rebels. Luke says he is not what he is supposed to be, at least not yet. He decides to start seeking some answers by returning to his home planet of Tatooine. Back on Tatooine, a mystery bounty hunter is seeking information from a group of Rodians on the whereabouts of Han Solo and is prepared to use deadly force to get it. He learns only that Solo is off planet. Later another bounty hunter questions the same group of Rodians as to what they know about Obi-Wan. This bounty hunter goes by the name of Boba Fett.

Retrieved from "https://marvel.fandom.com/wiki/Skywalker_Strikes?oldid=4736040"
Community content is available under CC-BY-SA unless otherwise noted.