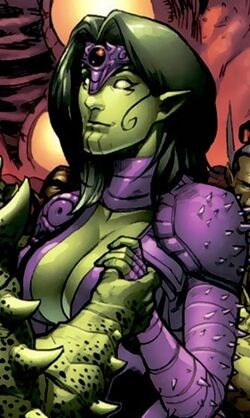 Millions of years ago, the Celestials visited the planet Skrullos, the home of the Skrull and through genetic experimentation on primitive Skrull they created three different races from the dominant Skrull life forms. The first was the Deviants that possessed shape-shifting abilities. The second race was a group of near-immortals with cosmic powers known as the Eternals. The third race or Normal Skrulls had no powers but did have the possibility for benevolent genetic mutations, much like their human counterparts. The Deviant race believed them to be superior to the other and used their shape-shifting abilities to wipe out the others leaving themselves the sole surviving race.[4]

Leader of a Deviant Skrull army that sought to annihilate all non-Deviant Skrulls from the Skrull homeworld of Skrullos. After killing innumerable Normals and Eternals she and her army tracked down Kly'bn, the last Skrull Eternal. In that confrontation, Kly'bn revealed that, as the last Skrull Eternal, he represented all that the Skrulls were and informed them of the countless races that could not change their shape. Convincing Sl'gur't and her army that he represented all Skrulls in their normal shape, the two joined together and ascended to godhood. Kly'bn representing the true form of the Skrulls and Sl'gur't, ever-changing, represented their shape-changing ability.[4]

As Skrulls conquered world after world, the gods of those races became subservient to Kly'bn and Sl'gur't.[5]

When the Skrull invasion force came to earth, a group of gods (called the God Squad), led by Hercules, were dispatched by the Council of Godheads of Earth to defeat the Skrull gods, demoralizing the Skrull army. When the God Squad arrived in their fortress, Kly'bn and Sl'gur't were forced into a confrontation. After being eaten by Demogorge, Sl'gur't caused the god-eater to explode, seemingly killing him because she represented too many different gods for him to digest at once. She then turned her attention to shape-shifting Japanese god Mikaboshi and began a shape-changing battle, each copying the other until, seemingly, she was victorious, ripping Mikaboshi in half. At the same time, the combined forces of Hercules and Snowbird led to the death of Kly'bn, causing the temple the Skrull gods resided in to collapse. As the remaining members of the God Squad (Ajak having been killed early on by Kly'bn) fled the collapsing temple, it was revealed that Mikaboshi, in Sl'gur't's form, had killed Sl'gur't in Mikaboshi's form, allowing the Japanese god to take the place of the dead Skrull gods.[4]

Superhuman Strength: Possesses some degree of superhuman strength due to godhood.[4]

Immortality: Does not age and can survive things that would kill most other beings.[4]

Skilled at using her shapeshifting powers in battle.

Like this? Let us know!
Retrieved from "https://marvel.fandom.com/wiki/Sl%27gur%27t_(Earth-616)?oldid=5554245"
Community content is available under CC-BY-SA unless otherwise noted.