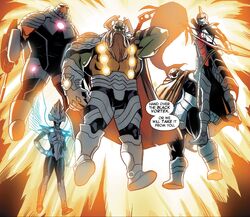 Later, the Slaughter Squad kidnapped Mister Knife's son, Star-Lord,[3] but he was ultimately rescued by his girlfriend, Kitty Pryde.[4]

With his plans moving forward after convincing Thane to join his cause,[5] Mister Knife allowed the Slaughter Squad to submit to the Black Vortex, unleashing their cosmic potential and turning them into the Slaughter Lords.[1]

Like this? Let us know!
Retrieved from "https://marvel.fandom.com/wiki/Slaughter_Lords_(Earth-616)?oldid=6081039"
Community content is available under CC-BY-SA unless otherwise noted.