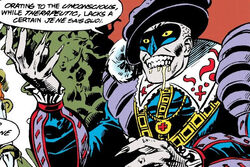 As a young man, the Slaymaster wanted to be an artist but lacked the skill. This pushed him to explore other means of "creating," ultimately leading him to explore the dark arts. He gained the ancient magical power of transfiguration, able to make living tissue obey his commands.[1]

Doctor Druid summoned Spider-Woman to help him investigate Slaymaker's actions when he began collecting bodies to make a "Panentropic Engine." The Engine would allow him to re-shape all of reality to his desire. The two were captured and joined the other bodies in the Engine.[2] Cadaver and US Agent, who were seeking Doctor Druid and Spider-Woman respectively, intervened and the distraction allowed Doctor Druid to devise a scheme to destroy the Engine.[1]

Had a variety of magical abilities related to transfiguration, including the ability to control his creations.

Like this? Let us know!
Retrieved from "https://marvel.fandom.com/wiki/Slaymaker_(Earth-616)?oldid=5834917"
Community content is available under CC-BY-SA unless otherwise noted.