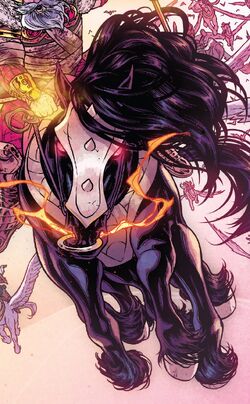 Sleipnir is Odin's magical eight-legged steed, and is supposed to be the greatest of all horses.[citation needed]

Two origins have been presented for Sleipnir:

The first involved Thor having to defend Midgard from an army of the undead, which had been summoned by the Enchantress. He took his steeds; Slaughterbit, Swamptooth, Snow Harpy, Smokemare, Stormbringer, Mudbrute, Firegnaw, Warhoof with him. Thor agreed to pilot the Blood Colossus to fight the undead as long as the humans did not eat his horses when they died to allow them to reincarnate. The humans however betrayed him and by the time Thor returned they had eaten all the horses. Thor returned to Asgard with their remains and used them coupled with Asgardian magic to create Sleipneir.[3]

In his second origin:

Loki had hastily agreed to let a Frost Giant re-build the wall around Asgard, in exchange for the Moon, the Sun, and Freya, only he had to do it in six months. The Frost Giant had only asked to use his grey stallion, Svadilfari. Right as the last brick was about to be placed, Loki transformed into a beautiful white mare, and lured Svadilfari off. Loki later gave birth to Sleipnir.[1]

Like this? Let us know!
Retrieved from "https://marvel.fandom.com/wiki/Sleipnir_(Earth-616)?oldid=5797951"
Community content is available under CC-BY-SA unless otherwise noted.