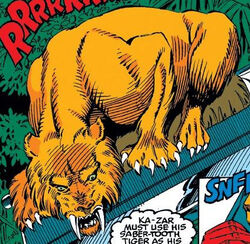 The Smilodon, also known as Sabretooth,[1] Sabretooth Tigers,[1] "Sabretoothed Cats",[2] and Saber-Tooth Tigers[3] were prehistoric predators to the early humans.

Around 30,000 years ago, the Smilodon were predators to the Neanderthals.[3]

A few thousand years later, they met but couldn't hunt down the Inhumans, due to their powerful weapons.[9]

Although thought extinct in the outside world,[5] the sabre-toothed tiger continued to exist in the artificial preserve known as the Savage Land into the Modern Age, as seen with Zabu.[10]

The Man-Apes hunting down the Smilodon to near extinction. Zabu was nearly killed at the hands of Maa-Gor, but was saved by Ka-Zar.[11]

Like this? Let us know!
Retrieved from "https://marvel.fandom.com/wiki/Smilodon?oldid=5616539"
Community content is available under CC-BY-SA unless otherwise noted.