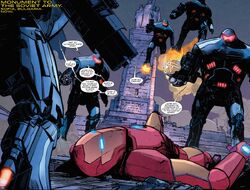 Sofia (Bulgarian: София) is the capital and largest city of Bulgaria.

Iron Man was defeated at the feet of the Monument to the Soviet Army in Sofia, Bulgaria. He's surrounded by different men in suits of armor, who wonder whether he's alive, unconscious, or something else. Iron Man's assailants remove his face plate, revealing his face. Tony refuses to fight the leader of the attackers, who is none other than Cassandra Gillespie. While she shares the thoughts, but she also refuses to let Tony stand in the way of her plans, she also promises him that fighting her will not get him closer to finding out the identity of his real father.[1]

Like this? Let us know!
Retrieved from "https://marvel.fandom.com/wiki/Sofia_(Bulgaria)?oldid=5388243"
Community content is available under CC-BY-SA unless otherwise noted.