Some high school from Xavier's School for Gifted Youngsters

I used to be a mutant named Wind Dancer. An X-Men. A hero. Those days are over. But it's taken me until now to realize even though I can no longer fly nor control the wind... I will always be able to dance.

Sofía was born and lived most of her life in Caracas, Venezuela. One day, while under the care of her uncle, Sofia's mother was killed in a riot in town. Shortly after her mother's funeral, Sofia was sent to live with her father, who was previously unaware of her existence. The head of a major supermarket chain located in the United States, Walter Barrett was an occupied businessman without the time nor the interest for a daughter.[5]

Despite her enthusiasm for the reunion, he quickly set three ground rules - she would learn English before school started, she would get good grades, and she would not use her mutant power. In return, he ensured her she would want for nothing.[5]

For weeks Sofia became increasingly isolated, being ignored by her father and classmates. Finally reaching a breaking point, Sofia entered one of her father's stores and let loose a hurricane inside it. Police officers found her collapsed in the fetal position amongst the wreckage and arrested her.[5]

Considering leaving her in prison for a while, ordering another paternity test, and possibly sending her back to Venezuela, Mr. Barrett was confronted by Danielle Moonstar. Having seen Sofia on the news, she "persuaded" him to enroll Sofia into the Xavier Institute.[5]

At the X-Mansion, Sofia met Julian Keller, who immediately felt an attraction to her. He offered her a guided tour, but animosity soon grew between Julian's crew and Sofia's new group of friends, including her roommate, Laurie Collins and the straight-laced David Alleyne.[10][11]

When Prodigy declined the offer to become the squad leader, Wind Dancer enthusiastically volunteered. However, Wind Dancer became increasingly isolated and irritable when the task of leadership proved difficult. Following a brawl with the Hellions Squad over the fate of Wither, Wind Dancer was able to convince Prodigy to become co-leader with her.[13]

Wind Dancer and Hellion's romance continued to progress, despite the rivalry between their squads.[14] Wind Dancer's leadership skills continued to improve and her friendships grew deeper and stronger. Unfortunately, secrets and lies caused deep divisions among teammates.[15] In an attempt to mend bonds, Sofia tricked everyone into a camp-out on the grounds of the Institute. While bickering and even fist fighting broke out, Sofia was able to eventually reconcile her teammates.[16]

Wind Dancer was one of the many mutants to lose their powers on M-Day.[17][18][19] When the depowered students were asked to leave the school, Sofia left the X-Mansion quietly with Derek before the Purifiers' attack that left forty-two students dead.[20]

At an unknown time, Sofia moved to New York City, where she lived alone and worked as a waitress at Al's Diner. Sofia still longed for the life of a hero and had several recurring dreams about flying, but she was fairly adapted to her new reality. Sofia was eventually approached by Beak and later Jubilee with an offer to join their anti-registration team, the New Warriors, but she refused the offer both times.[21] 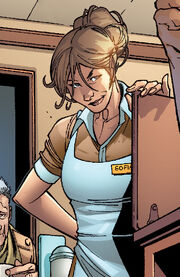 Returning to her job as a waitress, Sofia seemed more committed than ever. However, a battle between the New Warriors and a new Zodiac broke out near the restaurant and Sofia helplessly witnessed Cancer kill the New Warrior Longstrike.[22] With the Warriors fighting a losing battle and a little boy caught in the crossfire, Sofia charged towards the leader, Scorpio, providing enough distraction to give her friends the upper hand. While the super-powered individuals battled, Sofia tried to get the young boy to safety, but was hit from behind by an energy blast and suffered from burns, a concussion, and various other complications. Despite this, she made headlines for her heroic deeds during the battle.[8]

During her recovery, she was visited by Jubilee, who informed her that Night Thrasher had disbanded the team. Still wearing crutches to walk, she accompanied Jubilee back to HQ and gave a speech to increase team morale. After realizing they had found a new family with each other, they decided to remain as a team, with or without Night Thrasher. However, he too was moved by their words and chose to remain with the Warriors and train them even harder.[6] Sofia took on the codename Renascence while operating with the New Warriors.[23] 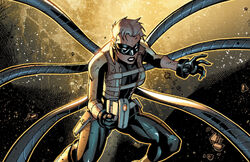 Sofia's first mission as a New Warrior put her and the team up against the Alphaclan, a villain team atop of S.H.I.E.L.D.'s most wanted list. While Sofia held her own on her first mission, the team's efforts fell short until Night Thrasher intervened.[2] She continued to perform her duties as a waitress, and lived off-base as to never be dependent on someone else ever again.[23]

During one of her shifts at the restaurant, Sofia was greeted by news reporter Kat Farrell of the Daily Bugle who wanted to know the "inside story" about the New Warriors, but the interview was cut short when Sofia realized Kat only wanted to publicly slam the New Warriors.[24]

From Outcast to Ambassador

A long time later, Sofia somehow heard of the Mojoworld's new-found obsession with mutants and went there to start live streaming, quickly managing to climb the broadcasting charts. After making a poll with her followers, it was revealed the majority wanted to see her die, so she hired Adam X to execute her. Moments before her demise, she addressed the audience one last time: "Let's give the people what they want".[1][7]

Mojo was planning to immediately dissect Sofia's body to use her genetic material in his cloning projects, but Shatterstar, who was one of the Top 5 live streamers, managed to stall long enough for X-Factor to get to Mojoworld and retrieve her body and the video of her death.[1]

Upon seeing the proof of death, The Five proceeded with her resurrection, returning her powers in the process. When she calmed down, she revealed to her worried friends that she had to let herself get killed in order to escape, but Spiral, Adam X, and Shatterstar still needed rescuing.[7]

With X-Factor banned from re-entering Mojoworld, they didn't immediately attempt to rescue Shatterstar, but, after learning he was the key to defeating the Morrigan, they assembled a squad composed of the New Mutants, Dazzler's band and some younger former students, including Sofia, to perform a risky rescue operation: while the band distracted Mojo and most of Mojoworld, the other teams destroyed the clone tanks, rescued the live streamers, and even trapped Mojo and forced him to sign a partnership with the mutant nation of Krakoa.[9]

After everyone was back from the successful op, Magik informed Sofia that she had been appointed the "Mojoverse babysitter" and was to keep an eye on it to make sure they followed the agreement.[9]

Sofia worked for marketing the relaunch of X-Corp.[25] Along with Trinary, she attended the Technology TALKS for the launch of X-Corp's ionospheric bandwidth generator.[26]

Wind Dancer was part of a special team as a member of the Marauders, the team saved the workers at an oil rig, and fixed the environment damage after the X-Men Green attacked them.[27]

As Renascence, Sofia possessed several devices, which granted her various powers including: