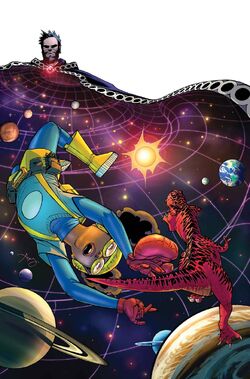 Sol or the Solar System is a star system within the Milky Way galaxy. The Solar System houses nine planets (including Mercury, Venus, Earth, Counter-Earth, Mars, Jupiter, Saturn, Uranus, and Neptune) and their 166 moons; as well as three dwarf planets (Pluto, Ceres, and Eris); one star; an asteroid belt; and other small bodies such as asteroids, comets, meteoroids, and interplanetary dust. The other-dimensional world of Polemachus is also located in the Sol system, occupying the same space as Earth.

Like this? Let us know!
Retrieved from "https://marvel.fandom.com/wiki/Sol?oldid=5826573"
Community content is available under CC-BY-SA unless otherwise noted.