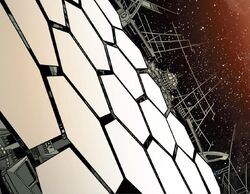 A Dyson Sphere in construction designed by Tony Stark as a fallback plan for the crisis of the colliding planets.[1] At a point before Thanos' invasion on Earth, it was operating at 0.008%, enough energy to power a moon.[2]

When a Shi'ar fleet attempted to destroy the Earth in order to put an end to the incursions, Iron Man used Sol's Hammer to slaughter the invading force, in the process, Sol's Hammer was destroyed.[3]

The schematics of Sol's Hammer eventually fell in the hands of Damage Control since the company also operated as an archival unit for government-contested technology that belonged to missing, incapacitated or deceased individuals. Despite Tony Stark and Reed Richards going to great lengths to ensure that their technology did not fall in the hands of other parties besides each other, Damage Control gained the rights to Sol's Hammer data after Reed was missing from a prolonged period of time and Stark was incapacitated.

The remains of the Sol's Hammers were later retrofitted by the Orchis into the Orchis Forge, a site for the construction of a Mother Mold.[4]

Sol's Hammer is capable of capturing and controlling the energy radiated by the Sun. In theory, it could destroy an entire planet with only 2% of the Sphere charged.[1]

Like this? Let us know!
Retrieved from "https://marvel.fandom.com/wiki/Sol%27s_Hammer?oldid=6434997"
Community content is available under CC-BY-SA unless otherwise noted.