For fictional versions of Sol Brodsky as a character within comic books and/or other media,
visit this disambiguation page.
Sol Brodsky 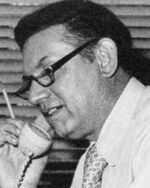 He was born in the borough of Brooklyn, the son of Abraham and Dora Brodsky, Sol Brodsky was the eldest among siblings Leonard, Ted, and Faye. His daughter is colourist Janice Cohen and his son Gary Brodsky was the publisher of Solson Publications.

In 1942 Brodsky began his long, if initially intermittent, association with Marvel Comics, writing and drawing four one-page "Inky Dinky" gag strips in Mystic Comics #10 (Aug. 1942) and an additional one in Comedy Comics #11 (Sept. 1952), for the company's 1940s predecessors, Timely Comics and Atlas Comics.

While Brodsky was concurrently freelancing for Marvel, inking The Fantastic Four #3 (the issue that introduced the team's costumes) and #4 (the return of the Golden Age antihero the Sub-Mariner), among other covers/interiors. As Marvel began to expand with the success of Fantastic Four, The Amazing Spider-Man and other titles, Brodsky's organizational skills and easygoing manner led Stan Lee, by now a friend for several years, to offer him the newly created, formal position of production manager in 1964.

Like this? Let us know!
Retrieved from "https://marvel.fandom.com/wiki/Sol_Brodsky?oldid=6549414"
Community content is available under CC-BY-SA unless otherwise noted.