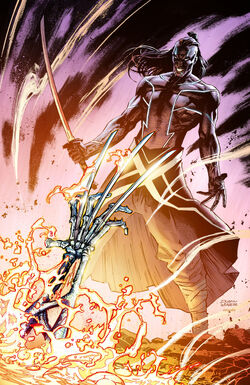 I may be a tenderhearted poet, but I’m also a killing machine.

Solem is an Arakkii mutant with Adamantium skin. 100 years ago, Bracken challenged Solem, who then killed him. For this murder, Solem was imprisoned in the pit of the Tower of Broken Will. Bracken's wife, War, gave Solem Bracken's Hellblade believing that the solitude would drive him mad and that he would kill himself with it. However, Solem was undaunted as he actually enjoyed the solitude, while other Arakkii who still adored him came to visit and brought him gifts. As Solem was one of the chosen individuals for Saturnyne's Ten of Swords challenge, War and Pestilence were forced to break him free in order to win the challenge.[1]

After getting the information he needed from the Oracle of Arakko, Solem used the Hellblade to access Hell. There he met his opponent, Wolverine, imprisoned while regenerating. After he introduced himself to Logan, the two were forced to cooperate in order to get their hands on the Muramasa Blade. They went looking for Muramasa himself, who had become a slave for the Hand. They stumbled across a Hand wedding carried out by the Beast, with Muramasa giving the couple their own blades. The mutant duo assaulted the wedding and killed the couple, with Solem taking the two swords, while Wolverine was snatched by the Beast. Solem offered to help Logan escape with one of the swords, in exchange for a favor, to which Logan agreed.[2]

During the tournament, Solem was pitted against his own teammate, War, in a challenge to see who could cut a limb off of an opponent first. Solem called in his favor with Logan, asking Saturnyne to summon him and telling War that he had just killed her son, before leaving. Logan was successful in winning the challenge, slicing off War's hand.[3] Following the end of the tournament, Solemn sneaked behind Saturnyne's guards and entered one of Krakoa's Gateways.[4]

Solem is a mutant with the following powers:

Like this? Let us know!
Retrieved from "https://marvel.fandom.com/wiki/Solem_(Earth-616)?oldid=6495649"
Community content is available under CC-BY-SA unless otherwise noted.