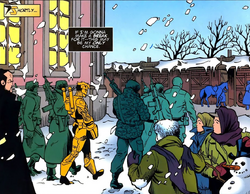 The Solntsevskaya Bratva were the most powerful crime syndicate within the Russian Mafia. It had a criminal empire that extended across the former Eastern Bloc and reached across to North America. Within Canada, the syndicate had members throughout the country. The syndicate was into a variety of criminal activities, including smuggling and arms dealing. It was well-armed and equipped, possessing helicopter gunships and military transport aircraft. Russian soldiers were either members of the syndicate or at its disposal.[1][2]

Retrieved from "https://marvel.fandom.com/wiki/Solntsevskaya_Bratva_(Earth-616)?oldid=5565511"
Community content is available under CC-BY-SA unless otherwise noted.