Solomon Institute for the Criminally Insane 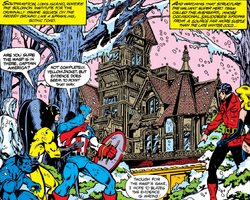 The Taskmaster's Academy officially known as the "Solomon Institute for the Criminally Insane" was a training school set up by Taskmaster. He did this instead of operating as a mercenary as he realized he could make more money training people then risking his own life on mission. Taskmaster traditionally acted as a teacher, training criminals in the martial arts and weaponry before sending them off as henchmen for other organizations like Hydra, the Secret Empire, U.L.T.I.M.A.T.U.M. and many more. Using his photographic reflexes, Taskmaster deconstructed the fighting styles of various super-heroes and world-famous martial artists, giving him a unique talent for teaching moves to his students.

When Dr. Pernell Solomon used the Solomon Institute for the Criminally Insane as a front, he used the Taskmasters school's resources to create a clone of himself called Selbe. When he required an organ donation due to possessing an extremely rare blood type, the clone, learning of his fate, contacted the Avengers. Taskmaster captured Yellowjacket, the Wasp, and Ant-Man when they attacked the site. Taskmaster battled the Avengers, who exposed his front operation. He was defeated and fled after a fight with the Avengers newest member the robot Jocasta, whose lack of body language made it impossible for Taskmaster to predict her next move.[2]

In addition to his training academy, Taskmaster also lent himself out as a mercenary or private instructor. He trained John Walker to be the new Captain America for the Commission on Superhuman Activities[3], then trained Cutthroat to fight Captain America on behalf of the Red Skull.[4]

Spider-Man and Deadpool are attacked by Taskmaster' Acolytes at the Taskmaster's Academy. They used stolen S.H.I.E.L.D. jet packs and attack the craft battling the Acolytes while falling. After dodging the missile, Deadpool reveals he is wearing a parachute as Spider-Man crashes into a tree. Deadpool and Spider-Man enter the Taskmaster's Academy where Spider-Man works to keep Deadpool from killing Taskmaster students. Taskmaster tries to attack Deadpool to no avail (due to Deadpool's unpredictable moves). Spider-Man manages to web up Taskmaster as it turns out that Taskmaster actually stole the S.H.I.E.L.D. list from Deadpool who planned to sell it for money and made up the "Agent McGuffin". Spider-Man then fights with Deadpool while evading the compound's death traps, Deadpool reveals what is thought to be his true origin but it is impossible to confirm, he was a street kid taken in by Fury and at first, the program worked, then he realized he was being manipulated and controlled and decided to leave. Spider-Man decides that Deadpool is not a hero but a mercenary who would do anything for money. Spider-Man then remembers that if it wasn't for Aunt May or Uncle Ben he may have turned out the same. Spider-Man manages to defeat Deadpool in a fantasy fight, involving giant chickens and cows on a farm and a fight dressed as pirates, ending the fight with a "Massive Morality K.O."(a boxing Glove emerging from a book Spider-Man tosses at Deadpool with a spirit voice saying: "With Great Power always Comes with Great Responsibility", a rule Spidey will never forget). Deadpool then gets away using a stolen jet pack, though Spider-Man is able to recover the file.[5]

Known graduates of his academy include Diamondback, Spymaster, Death-Shield, Longbow, and the Blood Spider. Anaconda and Crossbones both taught as regular instructors at his schools before graduating to super-villainy.

Like this? Let us know!
Retrieved from "https://marvel.fandom.com/wiki/Solomon_Institute_for_the_Criminally_Insane?oldid=6494880"
Community content is available under CC-BY-SA unless otherwise noted.