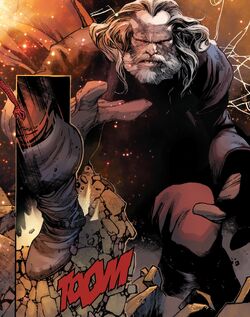 I am something you have never seen before. I am Solus. I herald the death of you all. Boys, feast! Kill as many as you can.

In the distant past, Solus' family took part in a battle against the Master Weaver and succeeded in capturing it and using its power to travel between dimensions and hunt all Spider-Totemic avatars. The cost of the battle was Solus' wife because his son Karn could not kill the Master Weaver, prompting his exile and having to wear a mask as sign of shame.[1]

He was present at the feast held on Loomworld where, as head of the family, commanded his children to bring Spider-Men and women as tributes. There they discussed about the Spider-Men gathering, the whereabouts of his estranged son Karn and the meaning of being in control of The Web of Life and Destiny. Soon after, he and his children proceeded to devour every Spider-Man at the table.[2]

When the Inheritors arrived to Earth-13 in the search for the Scion, one of the three most important spider-totems along with the Bride and the Other, Solus confronted the Cosmic Spider-Man. Even though he was powerful, the fact that his power came from pure life force, made Cosmic Spider-Man easily consumable by Solus.[3]

Solus and Morlun then captured the Scion, Benjy Parker, one of the totems needed for a sacrifice.[4] When the Other, Kaine, arrived to Loomworld in order to have revenge on the Inheritors for the death of Ben Reilly, he transformed into his monstrous form and attacked encountered Solus, Morlun and Daemos. With extreme ease, Kaine killed Solus, who had no chance of revival as Jennix's cloning facility had been previously destroyed by Kaine, Ben Reilly, and Black Widow.[5]

However, Solus' essence was kept by Jennix in a crystal. In the end, the Spider-Army managed to overpower the Inheritors and stop the ritual which would've ended them all. The Inheritors were left in Earth-3145, a universe with a radioactive Earth, where they would die due to them being extremely vulnerable to radiation, and couldn't escape, because the Master Weaver they had enslaved and used to travel across the Multiverse had been killed. However, Spider-Man gave them the knowledge of a shelter in Sims Tower, where they could survive, but not pose a threat anymore.[6]

The Inheritors, after hacking their cloning technology, that was transported to Earth-616, and make new clone bodies to them, decided to use the New U Technology, that was fused with their own, to bring him back.[7] However, clone his body wouldn't be enough. They would have to retrive the cristal containing his soul. Verna was sent after it, at Earth-3145, as was so the Superior Spider-Army, to prevent her from retriving it. She would, however, fail and die from radiation, but, in her final moments, she was able to use Spider-Woman's Dimensional Travel Watch, who was holding Solus' crystal, to send her right at the Transamerica Pyramid, where the Inheritors would be waiting for the crystal to resurrect their father, now with the clone body in stasis.[8] Now with the crystal, he finally returned to life. Scarlet Spider and the Superior Spider-Man tricked the Inheritors with Otto giving Ben to them so Jennix could feast on him and absorb his knowledge to understand the cloning technology since he was the one who created it. However, because of the many times Ben died and was resurrected it would "destroy his maniacal mind". Solus would kill Otto for this but was stopped by the new Captain Universe, Miles Morales. He was overwhelmed when Miles grabbed Leopardon's Sword Vigor and killed him.[9]

Solus possesses a variety of superhuman attributes as a result of Inheritors' unique physiology.


Life Force Energy Absorption: Solus' primary power is the ability to absorb the life force energy of other living creatures, thereby granting himself superhuman physical abilities. Even though Solus can absorb the energies of virtually any being, he must occasionally renew himself by feeding upon pure forms of animal-related superbeings from one of the four categories that make up his own, unusually pure, DNA such as animal, insect, human, and bird. Once Solus has touched a human, he is able to sense that person's life force across great distances. Unlike his children, Solus has shown to have no limit when absorbing life forces, as he could absorb the Enigma Force of the Cosmic Spider-Man [3]

Radiation: Solus and the Inheritors are extremely sensitive to radiation.[4]

Like this? Let us know!
Retrieved from "https://marvel.fandom.com/wiki/Solus_(Earth-001)?oldid=6464398"
Community content is available under CC-BY-SA unless otherwise noted.