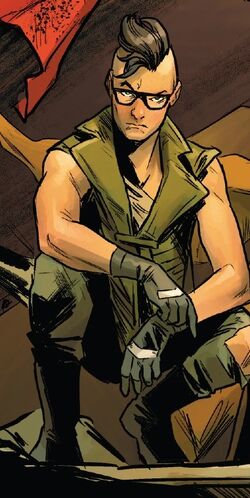 Som was the son of Nuclear Man, a chauvinistic despot from the alternate universe of Earth-74101.[1] When he took control of the Prime Marvel Universe's Roosevelt Island and raised a barrier that dilated time inside the area, Nuclear Man trapped all male populace inside a citadel.[2] Unbeknownst to him, Som possessed the ability to absorb super-powers, and his leeching off Hazmat, one of the people trapped within the island, allowed Nuclear Man to power the barrier.[3]

During the subsequent fifty days that transpired inside the barrier,[2] Som suggested his father seek out Captain Marvel to subjugate her and bear powerful children with her in hopes that she could instead defeat him, since Som rejected his father's ideals.[1] Som also managed to escape from the citadel, and joined the rebellion that had been formed by the women of the island, which included Spider-Woman, Echo, and Hazmat in its ranks.[2]

After Nuclear Man lured Captain Marvel into the barrier,[4] she joined the rebellion. Since Som was the only man to ever escape the citadel, she became suspicious of him. Her mistrust was exacerbated when Nuclear Man's robotic "Metal-Men" attacked the rebellion and attempted to capture Som, referring to him as "the prince."[2] After the "Metal-Men" were destroyed, Carol confronted Som, and he explained that he was Nuclear Man's son, but his desire to take down his father was genuine. Captain Marvel, Spider-Woman, Echo and Hazmat let him off the hook, but remained cautious of him.

During the rebellion's assault on the citadel, Carol and Rogue managed to overpower Nuclear Man, so he activated Som's powers to initiate an explosion. Som asked Captain Marvel to kill him before he went off, but she had Rogue use her own absorbing powers to neutralize Som, and as a result, the barrier fell. Captain Marvel managed to corner Nuclear Man, but he teleported away, forcing Som to leave with him as well.[3]

Power Absorption: On a cellular level, Som isn't entirely human. He possesses the ability to drain super powers from people within a several mile radius and store their energies.[3] The effect of his abilities has been shown to vary. Hazmat and She-Hulk were completely depowered as soon as they stepped inside Nuclear Man's barrier; Spider-Woman and Echo only had their powers malfunction sporadically; and Captain Marvel seemed to remain entirely unaffected.[2]

Like this? Let us know!
Retrieved from "https://marvel.fandom.com/wiki/Som_(Earth-74101)?oldid=5507358"
Community content is available under CC-BY-SA unless otherwise noted.