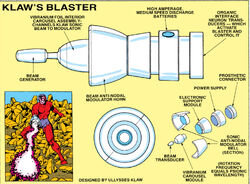 Ulysses Klaw wears a prosthetic device composed of molybdenum steel which contains a miniature version of his sound converter machine. The artificial hand is attached to his sound/mass body by as yet unknown means. Klaw can activate the circuitry of the device by pseudo-cybernetic commands. The sound converter was invented by Klaw, and later improved by A.I.M. scientists and technicians.

The Sound Disruptor is able to transform ambient sound to perform a series of functions, including the projection of intense high-volume sonic waves and blasts of concussive force and the creation of mobile sound/mass constructs. It can knock people out or give them severe migraines by producing certain frequencies. When he fought Volcana while trying to abduct Molecule Man he demonstrated the ability to create "cohesive sound". This was essentially an entangling/crushing construct that absorbed ambient noise to increase its size and strength. The noise from the target's struggles to remove the construct would make it larger and stronger. Volcana was only able to escape it by changing into her ash form.

Like this? Let us know!
Retrieved from "https://marvel.fandom.com/wiki/Sonic_Disruptor?oldid=6431930"
Community content is available under CC-BY-SA unless otherwise noted.