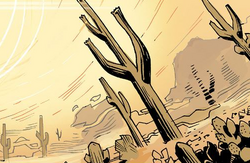 The Sonoran Desert is a biome that straddles the border between the southwestern United States and northwestern Mexico, reaching from southern Arizona to northern Sinaloa, in western North America.

A S.T.R.I.K.E. Black Ops team stole a H.A.M.M.E.R. Helicarrier, commissioned by Iron Patriot and known as the U.S.S. Prometheus, from a Top-Secret U.S. Military Hanger in the Sonoran Desert.[1]

Some time later Mariana Torres contacted Captain America when her grandson went missing in the Sonoran Desert. The local authorities suspected he had merely gotten lost or died of exposure, but Mariana believed he had been kidnapped by the Sons of the Serpent.[2] After traveling to Arizona, Captain America learned that the Sons of the Serpent were indeed kidnapping immigrants from the Sonoran Desert and that Joaquin Torres had been sold to Doctor Karl Malus back in New York City.[3]

Elsewhere, as Nighthawk was investigating Kymellian activities on Earth, his inquiry led him to a chemical plant in the Sonoran Desert where the aliens were storing some sort of stimulant. His analysis was cut short; however, when the Avengers Unity Division made their presence known.[4] Kyle signaled for backup, and the rest of the Squadron Supreme arrived soon after. Commander Steve Rogers ordered them to surrender for the murder of Namor, but Hyperion refused, and a fierce battle ensued. The two teams seemed evenly matched, though tides turned when Jim Hammond arrived with a virtual army of S.H.I.E.L.D. agents as reinforcements for the Avengers. At that point Thundra and Tyndall interceded, suddenly teleporting the Squadron Supreme to Weirdworld.[5]

When Black Bolt confronted Thanos in hopes of preventing the Mad Titan's invasion of Earth in the search of his son, he unleashed a powerful attack that triggered a Terrigen Bomb and destroyed Attilan in the process.[6] The resultant Terrigen Cloud released in New York City began to circumvent the globe, striking the Sonoran Desert and transforming Humans of Inhuman descent including Doris Bray.[7]

Like this? Let us know!
Retrieved from "https://marvel.fandom.com/wiki/Sonoran_Desert?oldid=5616912"
Community content is available under CC-BY-SA unless otherwise noted.