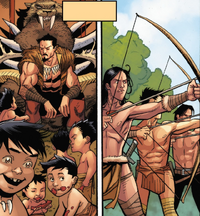 Base of Operations
Savage Land
Affiliations

The Sons of Kraven were 87 clones made from genetic material of Kraven the Hunter by the High Evolutionary. They were designed to age into adulthood at an accelerated rate. After Sergei trained them in the Savage Land, he sent all his sons out in the world to establish themselves as hunters and to be worthy of the Kravinoff name.

After Kraven regained his wealth and territories he awaited the return of his sons, but noticed that only one of them made it back, and that he killed the rest of them as he deemed them unworthy. He presented the skulls to Kraven which made him proud of his son.[1]

Retrieved from "https://marvel.fandom.com/wiki/Sons_of_Kraven_(Earth-616)?oldid=5425330"
Community content is available under CC-BY-SA unless otherwise noted.