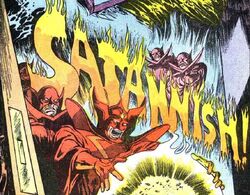 The Sons of Satannish were a group of sorcerers in servitude to the demon Satannish. They assaulted Doctor Strange and kidnapped Clea and even managed to banish the couple to another dimension. The two returned to Earth where Doctor Strange confronted the Sons' leader Asmodeus who cast the spell of Fire and Ice just before he died from a heart attack, summoning Surtur and Ymir. The Sons of Satannish were betrayed by their leader and banished to the dimension of Tiboro.[1]

Crystal of Conquest: Crystals which would allow each member to access and use the magical abilities of the whole group.

Like this? Let us know!
Retrieved from "https://marvel.fandom.com/wiki/Sons_of_Satannish_(Earth-616)?oldid=5609132"
Community content is available under CC-BY-SA unless otherwise noted.