Sons of the Tiger 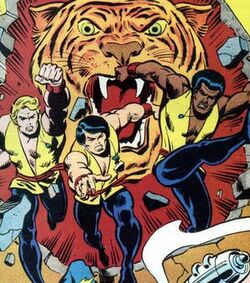 The Sons of the Tiger were three friends and Martial arts students of Master Kee:

Lin Sun was walking back from a Martial arts tournament with his 1st place trophy when he was suddenly attacked by ninja in front of his school in San Francisco. After defeating the villains he went into the "Tiger Dojo" which had been ransacked. He found a dying Master Kee who told him that there were forces in this world which would destroy us and then pointed to a box on a shelf after which he died. In the box Lin found three amulets made of jade, a tiger's head and two claws: the symbol of their school. The inscription at the base of the box read: "When three are called and stand as one, as one they'll fight, their will be done... For each is born anew, The Tiger's Son." They were later known as "The Amulets of Power".

Soon after, Lin met up with his two friends Abe Brown and Bob Diamond who had also been attacked by ninja. Lin recounted the story of Master Kee's death and gave each of them one of the Jade Tiger claw amulets. They soon discovered that when they joined hands and chanted the inscription from the box they became mystically connected. Their martial arts skills combined to become one force: their physical abilities were tripled when they wore the amulets.[1] The trio then went on to fight the Silent Ones, an evil organization with mystical ties attempting to rule the world. During this period, they were joined by Lotus, a former slave to the Silent Ones, whom they freed from their control.[2]

The trio eventually broke up (due to a romantic triangle between Lin Sun, Lotus, and Diamond) and Lin Sun threw all three amulets into a trash can located in an alley. There, White Tiger found the amulets and wore them to become The White Tiger.[3]

After the team split up, Diamond renewed his acting career,[4] while Lin Sun and Lotus unsuccessfully tried to find employment in New York.[5] Meanwhile, Abe Brown became involved in a plot that led to him becoming the Black Tiger.[6][7][8]

Equipment: The Amulets of Power

Retrieved from "https://marvel.fandom.com/wiki/Sons_of_the_Tiger_(Earth-616)?oldid=5550610"
Community content is available under CC-BY-SA unless otherwise noted.