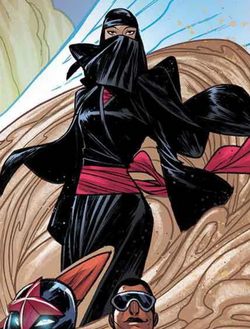 We are still X-Men, aren't we?

Sooraya Qadir was born in Afghanistan. As a child she was kidnapped and then sold into slavery.[4] Few years later Sooraya was rescued by Wolverine and Fantomex from a slave-trading ring.[5] She was sent to the Indian X-Corporation base in Mumbai. Sooraya hid herself from the X-Men who were stationed there by turning into sand and spreading herself around the complex. Phoenix sensed Sooraya's presence and telepathically convinced her to reveal herself to everyone present. Sooraya announced her presence by speaking a single word: "Turaab" ("Dust" in Arabic).[citation needed]

Ultimately, Dust was enrolled at the Xavier Institute in Westchester County, New York. Quiet and nervous, she experienced difficulty adapting to her new surroundings - particularly after being placed into Xorn's Special Class, which at the time was becoming increasingly radicalized as Xorn prepared to usurp Xavier. Xorn attempted to indoctrinate Sooraya, but she resisted because he demanded that she renounce her faith and embrace his vision of a world dominated by mutants, which she refused to do. She attempted to alert Xavier about Xorn's plans, but Xorn convinced the Professor that she was out of control, and thus Xavier used his powers to calm her enough so that she could be gathered into a jar. Even after being contained, the Professor could sense her panic, and shortly after, Xorn crippled him and began his destructive campaign to reverse the Earth's magnetic poles.[citation needed]

Some time later, when the school was rebuilt, Sooraya was given the loud and rebellious Surge as a roommate. This turned out to be a disaster, as the two often came to disagreements over the traditional garb which Surge believed to be an affront to women's rights. She was also made a member of the Hellions Training Squad, which was often at heads with Surge's squad, the New Mutants.[6] Her discomfort with questioning Keller's authority, even as he prepared the Hellions for an attack against the FBI, further soured relations between her and Surge. When the two squads battled each other outside Salem Central Station, Surge despised her roommate so badly that she was forced to shift targets with Wind Dancer by Prodigy. This resulted in Sooraya being blown in her granular form all the way back to campus. This had the unfortunate effect that Sooraya ended up naked when she materialized back at the Academy. Seeing how badly she had humiliated her roommate, Noriko assited her by giving her back her clothes and decided to be more tolerant with her. Meanwhile, despite her discomfort around others, Sooraya forged a friendship with Icarus.[7] He asked her to the school dance, but she declined since the idea of the dance made her uncomfortable, but he was not insulted.[8]

After M-Day, which depowered over 90% of the mutant population, the population of Xavier's student body was reduced to only 27 students. The squad system was dissolved, and the remaining students were merged into one large group. Sooraya was paired as roommates with X-23.[citation needed]

Sooraya became a target of William Stryker's crusade against the Xavier Institute, as he expressed his need to "eliminate the Muslim." Icarus gave her a note, which X-23 told Sooraya not to trust, as Icarus "smells like death". When Icarus visited the church of William Stryker he was shown why Dust was his next target. Nimrod had a vision of an altered future in his memory banks which showed Dust killing all the Purifiers by turning into a sand storm and ripping the flesh from their bones. After entering the church of Reverend Stryker, she was shown being shot down, though it was revealed to be X-23 wearing one of her niqabs. When Stryker's team infiltrated the school, Dust reappeared, surprising Stryker and playing a key role in defeating his Purifiers after all.[citation needed]

With the help of the rest of the New X-Men, Sooraya would later defeat Nimrod at Forge's place. Given the fact that the mission was unsanctioned and caused damages in Dallas, Texas, Sooraya Qadir was red-flagged by the O*N*E.[9]

Sooraya cried with Icarus's mother Lucinda Guthrie when she came to the Institute, and apologized for not being able to do more to save her son. His mother told her that Icarus thought she was a beautiful person (a significant statement, since he had never seen her without her veil on).[10]

Dust was shown praying to Allah before being teleported with the other students to Limbo where she was held captive by Belasco and his demons. X-23 broke free and urged Dust and Mercury to join her in fighting Belasco. Dust was too afraid of the demon that she thought of as the Devil, but when X-23 was seemingly killed, Dust broke free and attacked Belasco, saying that if she was to die, she would make Allah proud.[11]

Dust was one of the students to go up against the Hulk after his return to earth. She attacked him after he defeated Hellion but she too was defeated when Hulk pulled a water pipe up from the ground and sprayed a large amount of water on her.[12]

Regrouping after their failed attack under the leadership of Matthew Risman, the Purifiers were keeping track of the escaped Predator X. Horribly scarred by Dust's attack, Matthew fixated on training Predator X to seek out and kill Sooraya by using abayas and niqabs bearing some recognizable quality of hers (possibly her scent).[citation needed] While being trained to seek out and kill Dust, Predator X sensed the mutant it was originally created to destroy and the Purifiers followed.[13] Dust was crucial in the success of the battle against the Marauders as she helped take out the massively powerful and dangerous Exodus, by entering his body in her sand form and lacerating his lungs.[14]

She then joined the newly-formed team of Young X-Men along with Rockslide, Wolf Cub, Blindfold, as well as new students Ink, Cipher and Graymalkin. However, the team disbanded after it was discovered that the person who formed the team, Cyclops, was really Donald Pierce in disguise. During this time, the false Cyclops ordered the team to capture the original New Mutants. During their battle with Magma, Dust was turned to glass by Magma using extreme heat, and subsequently shattered. However, Magma was able to heat up all the broken glass, turning it into sand again and Dust returned to her human form unconscious. However, the change caused her cells to die. Dust tried to help the captured Donald Pierce escape in exchange for him finding a cure for her condition, but she subsequently changed her mind and attacked Pierce. It was her last act as she died in front of her friends. Ink tried to use his Caduceus tattoo to heal Dust but she was already dead. Later, Ink used his Phoenix tattoo and was able to resurrect Dust. However, the effort caused Ink to fall into a coma.[15]

Together with other mutants Dust relocated to the Graymalkin Industries in San Francisco and later to Utopia. She fought alongside the X-Men during the Skrull invasion of Earth.[16] When Selene's Inner Circle attacked Utopia, Sooraya was forced to fight with a former teammate Wither, and was heartbroken when he coolly killed Onyxx in front of her.[17] After the return of the Mutant Messiah and subsequent attack of the Nimrod Sentinels, Dust was amongst those who fought back at Golden Gate Bridge.[18]

Later, during Legion's reality warp, Sooraya was a member of the Moonstar Cadre. Once the alteration of reality was undone, Sooraya asked Emma Frost to remove those memories, afraid of the cruelty she had displayed.[19]

After the Schism Sooraya at first wanted to go with most of her friends to the Jean Grey School but quickly realized that Logan's team just deluded themselves, thinking that there was other choice but to spend their lives fighting for survival. She believed pretending so asked for a repeat of the previous tragedy.[20] She stayed with Cyclops' team on Utopia and with other former students was assigned to the Street Team to fight street crime, protecting San Francisco under the guidance of experienced X-Men.[21] She later assisted the Lights in beating Exodus.[22] Following the end of war between the Avengers and the X-Men Sooraya joined the Jean Grey School.[23]

After the destruction of the Xavier Institute and apparent death of the X-Men,[24] Sooraya found herself being harassed at an anti-mutant protest at Worthington Industries. She used her powers against some of the protesters (who she called "bigots") and, upon the arrival of the Champions to diffuse the situation, she allied herself with them.[25]

Dust helped the Champions in a battle versus some Rock Trolls in Australia. During the fight Cyclops joined in due to his memories from his younger self of being a Champion. After the fight, Dust told Cyclops the reason she didn't answer his call, but he told her not to worry about it because it seemed that she found her place with the Champions. Ms. Marvel asked Dust to join them after Cyclops vouched for her.[26]

Dust became a citizen of the new mutant nation of Krakoa. She later celebrated the return of the X-Men following their victory and death against Mother Mold.[27]

Dust is a mutant.

Sand Form: Dust has the ability to convert herself into a destructive sand blast by simultaneously transforming the substance of her body into loose silicon particles and creating an explosive release at her center, expelling her sandy mass at high velocity in all directions, then causing her particles to reassemble themselves back into her human form. With apparent telepathic control, she can then move at high velocity resembling a sand storm. The sand storm effect is strong enough to destroy steel and rip the flesh from one's bones; this is helped by the microscopic edges of the sand particles acting as tiny blades. She can also enter people's lungs and scour them from the inside.

Sooraya was considered a General Threat by the O*N*E, at the time of the M-Day.[29] Nimrod classified her as a Threat Level: Medium,[30] and after defeating him, she was red-flagged and allegedly reclassified by the O*N*E.[9]

Sooraya possesses the normal human strength of a woman of her age, height, and build who engages in moderate regular exercise.

While in her granular form, Sooraya can be weakened by wind or water.[12] Her sand form is also vulnerable to extremes of heat, causing it to crystallize into glass, paralyzing her.[3] Like many transmorphs, she reverts to her human form if exhausted or knocked unconscious.

Like this? Let us know!
Retrieved from "https://marvel.fandom.com/wiki/Sooraya_Qadir_(Earth-616)?oldid=6484390"
Community content is available under CC-BY-SA unless otherwise noted.