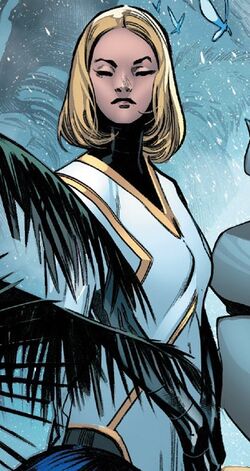 I was One in Five. The strongest. The first killed. The first betrayed.

While Emma Frost lay in a comatose state, Dr. John Sublime harvested eggs from her to begin experimentation. The Weapon Plus program then used the eggs to create thousands of identical mutant girls in the hope of developing a powerful weapon capable of killing every mutant on Earth by combining their telepathic abilities. The project was designated Weapon XIV, and the girls were incubated and artificially aged inside the subterranean level of The World.[3] While most girls remained dormant, five were sent to infiltrate the Xavier Institute as student sisters to hone their talents for Sublime's purpose.[4][5]

After the Xavier Institute went public,[6] Sophie and her sisters were enrolled as orphan quintuplet sisters.[5] To protect their secret origins, the girls unconsciously placed mental blocks in the minds of the faculty preventing them from investigating their background.[7]

The girls quickly gained the moniker "The Stepford Cuckoos", though their chosen codename was the Five-In-One. Emma Frost took a special interest in the girls, and the Cuckoos became her protégés.[8][9]

Much to her disapproval, the girls' rival, Quentin Quire, developed a crush on Sophie. Sparked by Sophie's rejection, learning that he was adopted, his uncontrolled powers, and fueled by use of the drug Kick, Kid Omega led a rebellion of students at the X-Mansion. To stop Kid Omega and his Omega Gang, Sophie and the other Cuckoos covertly snuck into Cerebra. Using Kick to amp up her powers, Sophie and her sisters were able to stop Quire. Unfortunately, Sophie died in the process.[10] Unbeknownst to the others, Sophie was actually being influenced into these actions by Esme, who was also using Kick.[11][12]

When the Phoenix Force returned to Earth in search of a new host, Kid Omega was awakened. Still in love with Sophie, Kid Omega exhumed her in hopes of reuniting.[1][13] However, upon her resurrection, she promptly rejected Quire and died once again.[14]

When an unstable fraction of the Phoenix Force sparked inside the girls, their dormant Weapon Plus nanotech inside their bones was activated. This nanotech briefly reanimated Sophie and Esme, who directed their sisters back to The World to activate Sublime's plan for the destruction of the mutant race. Sophie and Esme were later killed by Celeste wielding the Phoenix.[15]

When the Chaos King put the living asleep and opened the underworld, Sophie, Esme, Thunderbird, Banshee, Moira MacTaggert, and several dupes of Multiple Man were among the resurrected. Sophie confronted Esme about her death with little resolution. While searching for answers among the remains of the Xavier Institute, the former X-Men were attacked by the Carrion Crow. Sophie sacrificed herself to save the others,[16] and Esme later sacrificed herself to save her sister. As she and John Proudstar faded back into the afterlife, John mused perhaps that next time he was resurrected, he and Sophie would be together. Sophie replied that she liked the idea.[17]

Sophie was at some point resurrected by a group of mutants known as “the Five” (Eva Bell, Proteus, Hope Summers, Elixir, and Egg).

She was living on the sovereign nation state of Krakoa for mutants, created by Charles Xavier, Magneto, and Moira X. The Stepford Cuckoos and Magneto welcome a delegation of international ambassadors and representatives to give them a quick tour of this new world (showing them the new Jerusalem Habitat) while setting the terms of the new mutant state and its relationship to humanity.[18]

Sophie's powers are identical to that of her sisters though she was the strongest among them.[9][16]

Like this? Let us know!
Retrieved from "https://marvel.fandom.com/wiki/Sophie_Cuckoo_(Earth-616)?oldid=5860388"
Community content is available under CC-BY-SA unless otherwise noted.