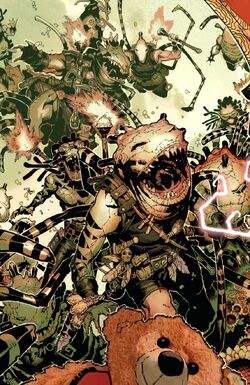 The Soul-Eaters are creatures native to the Sixth Dimension. A tribe of them had fled their realm and infested the spirit of a young boy on Manhattan's Upper West Side. The parents of the boy sought for help to Doctor Strange, who traveled to the boy's very soulscape and tried to make the creatures go away.

The tribe was unwilling to leave, claiming they had escaped from their dimension to keep ahead from the Empirikul's purge. Strange was forced to fight the tribe's champion, Spurrgog the Hell-Breather, and after making out with one of the female Soul-Eaters, he was able to convince them to leave the boy and instead infect child murderers convicted at Ryker's Island.[1]

Like this? Let us know!
Retrieved from "https://marvel.fandom.com/wiki/Soul-Eaters?oldid=5589492"
Community content is available under CC-BY-SA unless otherwise noted.