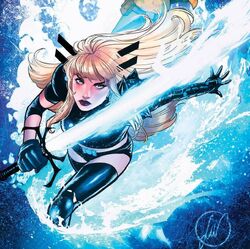 The Soulsword was a magical sword constructed of the life force of Illyana Rasputin forged in Limbo.

The Soulsword was created by Illyana Rasputina during the period in which she was trapped in a Limbo dimension ruled by Belasco. Illyana magically caused her own life force energy to manifest before her. Once this happened she cast her hand into the eldritch energy and drew from it the Soulsword. A simple looking blade upon its origin, it began to develop intricate designs and forms upon itself the more Illyana used it, becoming more powerful with each use.

Although usable as a physical weapon, its main use is to disrupt magical spells and beings, usually permanently. It was accompanied by armor covering Magik's left shoulder, chest, and arm. Control of the Soulsword seems to guarantee mastery over Limbo, but its full power could only be accessed by Magik. When Magik reverted to six years old, the sword transferred to her best friend Shadowcat.

At first the sword was stuck in a stone outside Excalibur's lighthouse, but after Doctor Doom tried to use it and Kitty to take over Limbo, it somehow incorporated itself within Shadowcat. Months later, the evil magician Darkmoor possessed Shadowcat and tried to make her turn over the sword. Eventually he possessed Nightcrawler, to attack Kitty from the outside, but he was defeated.

Amanda Sefton then convinced Kitty to give her the Soulsword, which she then turned over to her mother Margali Szardos. Margali, mad for power, used the sword to kill all of the magicians ahead of her on the Winding Way. She then gave herself a new body and joined the London Branch of the Hellfire Club. However, when Margali tried to tap into the demon under London, she was overwhelmed, and when Excalibur severed her from the interface, she and the Soulsword were captured by Belasco, Magik's mentor and ruler of Limbo.

Belasco also planned to use the Soulsword to gain power, but was eventually defeated by Margali, Amanda and Nightcrawler. The Soulsword, which had been knocked off of Belasco's tower during the battle, broke through the surface of Limbo in an armor-coated hand, perhaps signifying Magik's return. Jimaine later revealed she had been given a vision of the sword by Margali years ago.

In Jimaine's hands, the Soulsword's shape changed a little, and the more experienced sorceress increased its functions to include drawing spells and stepping disks in the air. She secretly sent the Soulsword to Nightcrawler, integrating it with him, to keep it out of danger in Limbo. The sword's presence attracted all manner of supernatural entities to Kurt, placing him and his friends in grave danger until Jimaine finally revealed its presence to him. Later, Mephisto tried to bribe Kurt into keeping the Soulsword out of the impending War Between Good and Evil, but Kurt refused. The Sword remained bonded to Nightcrawler.

In the events of X-Infernus, the Sword returned to its creator, Magik. Under the thrall of the darkness in her soul due to a previous adventure in Limbo, Pixie stabbed Nightcrawler in the chest with her Souldagger. Upon withdrawing it, she found the Soulsword stuck to the tip of the dagger. However, Illyana promptly teleports from Limbo once she senses its return. She then combats and defeats the X-Men: Beast, Rockslide, Mercury, and Pixie (who wields the Soulsword to fight her). Reclaiming The Soulsword, she reverts back to her human form.

After the Phoenix Force left Illyana her Soulsword also changed, now looking more like the Blade of the Phoenix and additionally now has the ability to be used as a powerful weapon that can harm and kill as well as deflect attacks.[3]

Like this? Let us know!
Retrieved from "https://marvel.fandom.com/wiki/Soulsword?oldid=6540799"
Community content is available under CC-BY-SA unless otherwise noted.