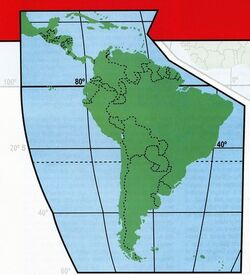 South America is a continent between the Pacific and Atlantic Oceans.

In 1946, the Blonde Phantom and OSS Agent Mark Mason traveled to an unspecified South American town, to stop a powerful poison invented by Nazi scientist Dr. Hans Rheint from falling into the wrong hands.[2]

At the end of World War II, Nazi scientist Fritz Von Meyer fled Germany to settle in South America. A world expert on toxic poisons and apiculture, he continued his research on breeding patterns of killer bees in comparative peace deep in the jungles, where he eventually found the mutated beehive which caused him to become the aggregate being known as Swarm. Shortly afterward, the international police agency Interpol, in its quest to bring war criminals to justice, managed to track down von Meyer and capture the queen bee of his swarm, encasing it in amber and fleeing to the United States of America, followed by Swarm himself.[3]

In 1954, Atlantis went to war against South America, thanks to the machinations of Byrrah the stepson of Emperor Thakorr. The assault was thwarted by the Sub-Mariner who tricked the fleet into entering a trap and forced them to retreat.[4]

In an almost inaccessible canyon located in an uncharted South American jungle area, Baron Zemo received the supplies brought by Franz Gruber, discovering that Captain America was still alive, so he ordered his messenger to find three people.[5]
Zemo was then visited by the Enchantress and the Executioner, whom he teamed up to stop Captain America.[6]

Goliath landed in an unexplored area of South America to look for his old college professor Dr. Anton, only to find him captured by the Keeper of the Flame. He tried to save him, but was overwhelmed, then brought to safety by Prince Rey, who was leading a rebel force against the Keeper.[7]
Joined by the rest of the Avengers, they managed together to destroy the Cobalt Flame and free Dr. Anton.[8]

On behalf of the Mandarin, the Swordsman and Power Man attempted to take control of the most modern capital in the hemisphere, but their invasion plans were soon foiled by Goliath, Iron Man and the Wasp.[9]

Uruguay and Argentina were in a conflict, when a Stark Industries atomic bomb decimated Montevideo, Uruguay's capital city, while Iron Man tried to control the situation.

Bishop chased Cable to South America in the year 2753 of Earth-80521, where chemical fires were destroying rain forests.[12]

Like this? Let us know!
Retrieved from "https://marvel.fandom.com/wiki/South_America?oldid=6488989"
Community content is available under CC-BY-SA unless otherwise noted.