South Dakota's Black Hills where the site of the construction of Mount Rushmore during the course of the 20th Century. In 1943, the site was threatened by Nazi sympathizer Eric Ward who plotted to blow up the monument. This plan was foiled by the Human Torch and Toro.[1] 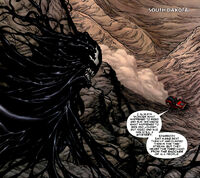 In the Earth-807128 reality, Symbiotes roam the Black Hills of South Dakota. It remains to be seen why.[2]

The Red Skull has also had his image carved into Mount Rushmore.[2]