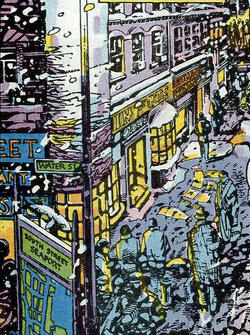 During a snowstorm during the busy Christmas shopping season, Wolverine and Energizer were attacked by Lady Deathstrike and cyborgs Angelo Macon, Murray Reese and Wade Cole, but they eventually managed to defeat them, walking off into the winter storm together[1].

While on assignment for the Daily Bugle, Peter Parker ran into Angela Yin meeting her cousin Meiko at the Seaport carnival. A group of ninjas, the True Believers, led by Karsano who believed he had the Dragonfly power, attack Meiko, prodding Spider-Man into action.[2]

Like this? Let us know!
Retrieved from "https://marvel.fandom.com/wiki/South_Street_Seaport?oldid=5276005"
Community content is available under CC-BY-SA unless otherwise noted.