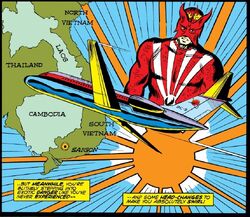 South Vietnam, officially the Republic of Vietnam (RVN), Vietnamese Việt Nam Cộng Hòa from 1955, was a country that existed from 1954 to 1975 in the territory of Vietnam that lay south of the Demilitarized Zone while North Vietnam was situated to the north of the DMZ. The partition was made during the Geneva Conference (1954), after the Viet Minh fought successfully to end almost 100 years of French colonialism. The Republic was proclaimed in Saigon by Ngo Dinh Diem on October 22, 1955, after the Emperor Bao Dai was deposed.

Like this? Let us know!
Retrieved from "https://marvel.fandom.com/wiki/South_Vietnam?oldid=4164622"
Community content is available under CC-BY-SA unless otherwise noted.