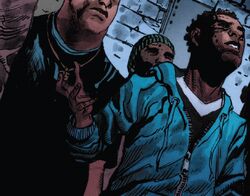 The Southstone Rangers was one of the two largest gangs in Chicago. They were locked in a war against the other big gang, the Spanish Kings. In an attempt to defuse the situation, Falcon approached the Rangers' leader, Dray, to convince him to work out a truce with their enemies. Despite Dray's reluctance to listen to Falcon's words, his men convinced him to give it a chance. However, the day when both gangs gathered to call truce, Dray instead shot the Spanish King's leader, Ortiz point blank in the head in front of Falcon, and chaos ensued.[1]

Retrieved from "https://marvel.fandom.com/wiki/Southstone_Rangers_(Earth-616)?oldid=5684429"
Community content is available under CC-BY-SA unless otherwise noted.