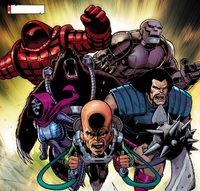 Origin
A group of Soviet Super-Soldiers put into cryogenic sleep in order to be woken up in the event of a nuclear attack on American soil.

A group of 1960's era Soviet agents who were put into cryogenic sleep during the Cold War, to be woken up in the event of a nuclear attack on U.S. soil to act as a "clean up crew." The team was woken up accidentally after an enormous explosion was set off off the coast of California during a fight between the Infernal Man and the Order.[1][2]

The Order fought the Soviet Super-Soldiers, defeating them after Order member Supernaut killed the five Soviet agents controlling the Super-Soldiers from their homebase on Drenkov Island. In response, Crimson Dynamo attempted to self-destruct with a nuclear bomb hidden in its armor, only for Order member Aralune to use her powers and render the explosion harmless.[2]

Retrieved from "https://marvel.fandom.com/wiki/Soviet_Super-Soldiers_(Alpha_Gen)_(Earth-616)?oldid=4936072"
Community content is available under CC-BY-SA unless otherwise noted.