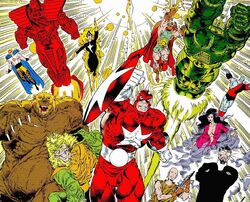 The Soviet Super-Soldiers (Russian: Советские супер-солдаты) are a government sponsored team of extraordinary individuals with special abilities. They fight for the people of the Soviet Union and the Warsaw Pact. They were created to rival the American team the Avengers.[2]

Professor Phobos was appointed head of the program to find and train their super-powered operatives. The mutant Mikhail Ursus was the first trainee selected and became known as Ursa Major due to his ability to shape-shift into a large brown bear.[2]

The next recruits to the team were the brother and sister mutants Laynia Petrovna and Nikolai Krylenko, who became Darkstar and Vanguard. Dmitri Bukharin, the fifth Crimson Dynamo joined the team to form the first roster of the Soviet Super-Soldiers.[3]

Later, the three mutants members decided to remove all ties to the Soviet government, and kicked the Crimson Dynamo out as he still worked for the KGB.[4]

The Gremlin later joined the team while and wore the Titanium Man Armor, but was killed on a mission.[5][6]

The remaining mutant trio of Super-Soldiers were hunted to America and beaten into a collective coma by their replacements, the Supreme Soviets.[7] Sometime later, the Super-Soldiers awakened and were absorbed into a group of mutant outcasts and exiles led by Father Alexei Garnoff, occasionally known as Siberforce.[8]

Eventually, Siberforce and the Supreme Soviets reformed under the new name the Winter Guard which reflected the current political climate in Russia.[9]

Like this? Let us know!
Retrieved from "https://marvel.fandom.com/wiki/Soviet_Super-Soldiers_(Earth-616)?oldid=5743419"
Community content is available under CC-BY-SA unless otherwise noted.