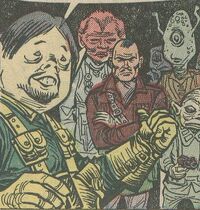 A gang of space pirates hiding out on Ghoul Planet used advanced technology to raise an army using stolen bones, creating a skeleton army. The skeletons were then used on raids, attracting the attention of the Space Sentinels peacekeeping force. Space Sentinels Speed Carter, Johnny Day, and Crash Morgan were instrumental in stopping the space pirates by smashing their machines disabling their ghoulish army and the space pirates were taken into custody.[1]

Retrieved from "https://marvel.fandom.com/wiki/Space_Pirates_(Ghoul_Planet)_(Earth-5391)?oldid=5065816"
Community content is available under CC-BY-SA unless otherwise noted.