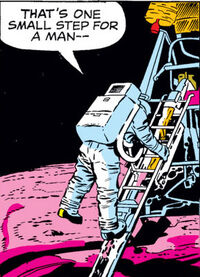 The Space Race refers to the 20th Century competition between two Cold War rivals, the Union of Soviet Socialist Republics and the United States of America, for dominance in spaceflight capability.[1]

The race has its origins back in World War II. Afterwards both sides used the work of Nazi scientist and rocket experts. Wernher von Braun who was recruited to the US by the CIA as part of Operation Paperclip.[2]

On October 4th, 1957, the Soviets launched the first man made object into space Sputnik 1 a simple satellite that sent a simple beeping signal.[1]

The Soviets followed up with Sputnik 2, carrying a dog named Laika. Laika survived but was mutated in the mission and battled Department Zero.[3]

The US counteracted with Explorer 1, their first satellite launched into space. A young Reed Richards was involved in the design.[1]

On April 12, 1961, cosmonaut Yuri Gagarin was the first human in space making one trip around the Earth Orbit.[4][5]

In February 1962, Friendship 7 was launched into orbit piloted by astronaut John Glenn, who performed three orbits of the Earth.[6]

In the 1960's another dog named Cosmo was used as a test subject. He was launched into space but drifted off into space arriving in Knowhere. His travel through space mutated him giving him enhanced intelligence.[7]

In July 1969, Neil Armstrong and Buzz Aldrin walked on the moon.[8] However they were unaware that his mission was jeopardized by the Skrulls, trying to undermine the space program on Earth as part of a future invasion. This plot was thwarted by the First Line. [8]

In 1972, the Soviets launched the Neverlab space station into orbit in secret.[9]

On December 14th, 1972, Doctor Kuznetsov sent his robotic creation Udarnik to the moon. As nobody else had returned to the Moon ever since, Udarnki grew resentful of mankind.[10]

In 1975, one of the Apollo Command Modules docked with a Soviet Soyuz capsule, and the astronauts shook hands. This was the beginning of the end of the space race.[11]

In 1977, Voyager 1 was launched to study the outer planets of the Solar System.[12] Part of the Voyager program, it was launched 16 days after its twin, Voyager 2.[12] They later launched Voyager 3 this probe was encountered by Galactus.[13]

The Space Shuttle Challenger launched and landed nine times before breaking apart 73 seconds into its tenth mission, 51-L, on January 28, 1986, resulting in the death of all seven crew members, including a civilian school teacher.[6]

The following appearances of the event should be considered topical references:

Famed scientist Dr. Reed Richards built his own rocketship in an attempt to beat the Soviets to the Moon. The ship carried himself, pilot Ben Grimm, Susan Storm, and Johnny Storm. The group were bombarded from Cosmic Radiation.[15]