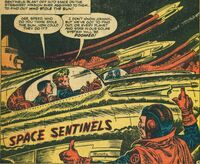 The Space Sentinels haile from Earth-5391 a reality where space exploration and travel on Earth boomed in the 20th Century leading to the formation of the United Planets a coalition of planets in Earth's solar system that were dedicated to intergalactic peace. In order to obtain this goal they formed the Space Sentinels as a peace keeping force in the known universe whose mandate was to stop conflict as well as explore new worlds, and whenever possible convince them to join the United Planets. The exact events leading to the formation of the Space Sentinels is unknown, however by the year 2075 they are commanded by Colonel Stone. Under Stone's command are Captain Speed Carter, Lieutenant Crash Morgan, and Cadet Johnny Day among others[1]. Also among the Space Sentinels forces are Colonel Stone's daughter Stellar Stone (who appears to have a diplomatic function)[1], scientist Doctor Venture[2] and veteran pilot Major Ram[3]. The majority of the Space Sentinels recorded missions were usually single handedly resolved by Speed Carter and his young sidekick Johnny Day. Their most frequent foes were the Saturnians[1].

The earliest recorded Space Sentinel mission included breaking up an alliance between the Saturnians and Blobs. Later many of the Space Sentinels and their ships were captured by the Starmen led by Kop but were rescued by Speed Carter. Carter later stopped a Saturnian plot to steal a disintegration ray[1]. Carter also saw the joining of the Birdmen of Uranus inducted into the United Planets, stopped mad scientist Professor Alfred Kurt and his Half-Men, brokered peace with the Lizardmen, and stopped a massive Saturnian robot[4].

The Space Sentinels later stopped a group of space pirates stationed on the Ghoul Planet from using reanimated corpses to look for them, made an alliance with the Core People who lived below the Earth in time to stop a Saturnian invasion, and wiped the Bem raiders[5]. Later, Carter and Day personally established peace between the Positpeople and Neganatives of the Moon. The entire fleet was later integral in stopping the Jetmen from attacking the Earth, and stopping the deadly Mosquito Men, but not before they could murder Doctor Venture[2]. Speed and Johnny later rescued a group of scientists who had been in suspended animation since the year 2050 from the Ice People. Upon their return to Earth, Speed, Johnny and the rest of the Space Sentinels defended Earth from the Beastmen, the conflict ending when Major Ram sacrificed himself to redirect a meteor set to collide with Earth, destroying the Beastmen planet in the process. The Space Sentinels also wiped out a Vegan invasion fleet that were tricked into flying into their defences by Speed Carter[3]. The Space Sentinels next destroyed a pair of beings dubbed the Thing from Outer Space, in reality massive raiding ships created by space pirates. Speed and his friends next stopped the spies Comet and Bulka from infiltrating the Space Sentinels. Shortly thereafter, Speed and Johnny brokered peace between the warring Scorpeople and Centaurs[6].

Equipment: Each member of the Space Sentinels had wore spacesuits and helmets that allowed them to breath in outer space and on other worlds that did not have oxygen based atmospheres. They also occasionally utilized "Zoom-Vests" harness mounted jet packs that allowed them to manoeuvre in space.
Transportation: Members of the Space Sentinels had rockets that could fly intergalactic distances that were powered by "atomic gas". Their primary weapons were "Hydro-Guns".
Weapons: Space Sentinels had access to many various weapons, but most use a standard issue hand-held "Hydro-Gun".

Retrieved from "https://marvel.fandom.com/wiki/Space_Sentinels_(Earth-5391)?oldid=5065872"
Community content is available under CC-BY-SA unless otherwise noted.