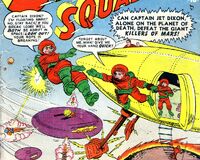 Base of Operations
Washington, D.C.
Affiliations

Not much is known about the origins of the Space Squadron, who hale from Earth-5106 a reality where space travel and exploration blossomed in the 1950s. They are the peacekeeping force that defends the united federation of planets run by the Galaxy organization, the governing body that evolved out of the Earth's United Nations. The Chief of Galaxy, Bennett "Blast" Revere also oversees Space Squadron missions and was once a former member.

By the year 2000 field command of the Space Squadron was given to Jet Dixon. Other members of Space Squadron at the time included Bennett's son Edgar, who resented being overlooked for command over Jet and frequently attempted to sabotage Space Squadron missions in an attempt to discredit Jet and usurp control of the Squadron, but always failed in his attempts; young cadet Rusty Blake and Saturnian science officer LLA 38. They group later admitted the Martian warrior Mxxptrm who took the nickname "Max"[1]. There is also a group in Space Squadron called Squad 3, which consists primarily of Saturnian scientists under LLA 38's command[2]. The majority of other members and specific squads are unnamed and unknown.

The earliest Space Squadron missions found the group battling renegade members of the Oranois and Shperoid races as well as mad scientist Tombalo from the planet Uranos, and later helped the barbarian VDBN sect of Martians to learn the ways of peace[1][3]. When anarchy swept the Mercurians of Mercury due to an unknown force causing their evil sides to awaken, the Space Squadron determined that it was due to the Sun moving too close to Mercury. Squad 3 developed a magnetic device that restored the Sun to its natural orbid ending the crisis. Using a newly developed Distrubo-Ray device the Space Squadron learned of an undersea volcanic eruption on the planet Neptune. Going to the aid of the Neptunians, the Squadron helped stop an invasion of the Neptunians natural enemies the vamperic Octopus-Men[2][4]. The primary members of Space Squadron were later involved in the 2000 AD Olympics taking place on the Moon. There Moonmen Drago and Ura attempted to use their hypnotic powers to force Jet Dixon to throw the rocket competition to discredit the Earth, but this plot was thwarted by LLA 38. When Boz an intergalactic criminal held the Galaxy delegates hostage, the Space Squadron responded by dumping lethal Atomic Dust on him, killing him and ending his bid to conquer the solar system. The base members of the Squadron were then forced to participate in Kalandra's new experimental gas that would theoretically make them immune to pain, hunger and the elements. While the experiment succeded in the desired results, it also had the side-effect of causing painful, disorienting and completely random teleportations. However this worked to the Squadron's benefit as they stopped Edgar Revere from selling Atomic Dust to a band of renegade Frogmen[5][6].

Retrieved from "https://marvel.fandom.com/wiki/Space_Squadron_(Earth-5106)?oldid=5567648"
Community content is available under CC-BY-SA unless otherwise noted.