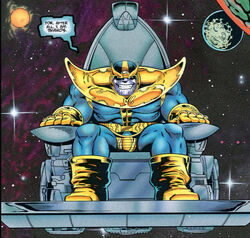 The Space Throne was a throne-like chair capable of faster-than-light travel, teleportation, and dimension travel.[1] The Throne was also capable of generating a powerful force field and emitting energy blasts from the top of its frame.[citation needed]

Thanos was seen sitting on his Space Throne during a tense meeting with Ronan. The throne floats in the air, but other than that, any other capabilities that it may have haven't been revealed.[2]

Like this? Let us know!
Retrieved from "https://marvel.fandom.com/wiki/Space_Throne?oldid=6538716"
Community content is available under CC-BY-SA unless otherwise noted.