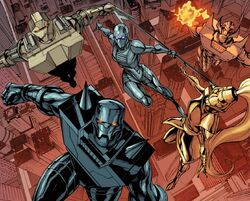 Base of Operations
Galador
Affiliations

The Spaceknights are an elite corps of cyborg warriors created by the humanoids of the planet Galador to battle the Dire Wraiths. About two hundred years ago, a fleet of Galadorian starships entering the so-called Dark Nebula was destroyed by the Dire Wraiths. A Dire Wraith warfleet prepared to invade Galador itself. The Prime Director of Galador asked the general populace of the planet for volunteers to give up their humanoid bodies and undergo surgical conversion into an army of cyborg warriors called Spaceknights who would be adapted for the rigors of combat in outer space.

The first to volunteer was a man named Rom, who became the greatest and most heroic of the Spaceknights.[1] Millions volunteered, but only a few hundred were accepted and underwent surgery in which much of his or her body, including his or her brain, was transplanted into a computerized exoskeleton onto which his or her autonomic and central nervous systems were grafted. Those portions of the subjects' bodies which were not used in the conversion process were cryogenically preserved on Galador in the Halls of Science. The Galadorians intended to restore the Spaceknights to their original humanoid forms once the war with the Dire Wraiths was over.[2]

The Spaceknights were dispatched with rocket pods and offensive weapons especially suited to each Spaceknight's particular cybernetic strengths. Each Spaceknight was thus equipped with a different weapon than the others, or had armor designed so as to give him or her a special power or powers. In the major confrontation that ensued, the Spaceknights destroyed the bulk of the Dire Wraiths's fleet and their monstrous creature Deathwing.

Large numbers of Wraiths had escaped the battle, however, and Wraith strongholds were believed to exist in other parts of the universe. Hence, Rom and the other Spaceknights left Galador to stalk Dire Wraiths throughout the universe, and did so for over 200 Earth year.[2]

A number of Spaceknights, including Breaker, Pulsar, Scanner, Seeker, Trapper, and the The Unseen, worked together as the so-called Spaceknight Squadron. Most of the original First Generation of Spaceknights possess (in their cyborg forms) superhuman strength, the ability to fly (using rocket pods on their backs), the ability to survive indefinitely in outer space, and high resistance to injury by conventional means. Each Spaceknights' armor was principally made of Plandanium, an extremely strong metal alloy. Large power requirements, such as movement and the picking up of objects, made use of a meson/antimeson thermo-electric battery which can operate under normal conditions for five Earth centuries. The flexible metal exoskeletons contained fluid "motors" which give the Spaceknights their great strength. The Spaceknights' brains are kept alive in a blood-like fluid that circulates through the body organs within the exoskeleton.[2]

When the Galadorian Armada entered the sector of space known as the Dark Nebula bringing gifts of technology and peace, they were savagely attacked and massacred by the sorcerous Dire Wraiths. The Wraiths then assaulted Galador itself. In desperation, the Prime Director called on the youth to sacrifice their humanity to become cyborg warriors as a last ditch line of defense.

A thousand brave Spaceknights formed a line of battle around Galador and in savage combat defeated the Wraith fleet scattering it across the cosmos.[1] Realizing the decimated Wraiths would infiltrate whatever worlds they came to and rebuild their strength to once again assail Galador, the first generation of Spaceknights set forth on the quest to rid the Universe of their evil.

Two centuries later, Rom would return to Galador just in time to lead a portion of the First Generation Spaceknights against Galactus. Rom was able to strike a bargain with the devourer to lead him to an entire star system that he could consume instead. When Galactus was unable to stomach the Black Sun he still kept his bargain with Rom in part by moving the approaching Galador to another location where none of the First Generation knew.[3]

With their home system relocated and now defenseless, the Galadorians created the Second Generation of Spaceknights to be more powerful than the first by utilizing less of their humanity. When no threats arose, these members became renegades and eventually turned on the Galadorians and depopulated the planet. Rom and the Spaceknight Squadron later found their home and confronted these renegades with only Rom surviving. The remainder of the First Generation went to the stars to continue to do good.[citation needed]

The Third Generation were created by the revitalized Galador under the leadership of Rom and Brandy Clark of Earth. With Galador once again in contact with it colonies, the planet once again established itself at the forefront of cyborg technology. This group took part in the Annihilation wars aiding Nova, Quasar (Phyla-Vell) and Blastaar against the Annihilation wave. The Galadorians began a "Restitution Initiative" in aiding the rebuilding of other worlds after the war. One cadre would be corrupted by the Phalanx when they answered a distress call and used to infect the war-net of the Kree Empire.[4]

When Starlord began the formation of a team of universal protectors known as the Annihilators, the Galadorians sent Ikon as their representative. Soon upon her arrival, a Skrull named Klobok assumed the identity of the Wraith Warlock known as Doctor Dredd and relocated the sorcerous Black Sun from its shielded cloak inside the Dark Nebula to the Galadorian home system. This led to the return of Wraithworld from Limbo and the fusing of both Galador's Sun and the Wraith's into one stellar mass. The Annihilators then shifted the orbits of both worlds so that Galador always faced the natural yellow sun and Wraithworld the half that was the Black Sun.[5] An uneasy truce now exists between the two races.

For more informations, please see the complete list of Spaceknights, by generation.

Equipment: All Spaceknights are equipped with Galadorian armor made of Plandanium
Transportation: Personal via stardrive rocket pods and starships.
Weapons: Each Spaceknight has unique weapons and abilities attuned to their own personal attributes.

Retrieved from "https://marvel.fandom.com/wiki/Spaceknights_(Galadorian)_(Earth-616)?oldid=5551863"
Community content is available under CC-BY-SA unless otherwise noted.