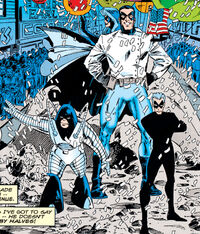 The Spacemen were a quartet of former space program trainees who stole a meteor fragment previously collected by John Jameson. The meteor mutated them, giving them super-powers. Rather than actually become super-heroes, they posed as a Fantastic Four-style group while secretly committing crimes that events would conspire to be blamed on Spider-Man. The young super-hero eventually found out the truth and exposed them as the true thieves.

Retrieved from "https://marvel.fandom.com/wiki/Spacemen_(Earth-616)?oldid=5550640"
Community content is available under CC-BY-SA unless otherwise noted.