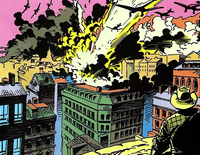 The Spanish Civil War took place in Spain from 1936 to 1939. The Republicans, who were loyal to the democratic, left-leaning Second Spanish Republic fought against the Nationalists led by General Francisco Franco.[1]

In 1936, the Spanish Civil War broke out, supported by Nazi Germany and Fascist Italy.[1]

In 1937, the Mutant adventurer Logan and his friend Eugene Judd assisted in the Spanish resistance. They battled along side writer Ernest Hemingway. [3] This battle was briefly relived by the two heroes future selves who were transported into the past along with Wolverine's foe Lady Deathstrike who attempted to assist Nazi Captain Horst Schlachter stop the resistance fighters. Ultimately this plot was foiled and the future Logan and Puck were returned to their own time along with Lady Deathstrike[4].

During the war, American Playboy Dan Kane adopted the masked identity of "Captain Terror" battling against the fascist forces. With the success of General Franco's side, Captain Terror allowed the fascists to believe he had been killed, and returned to the United States.[5]

In 1939, the Nationalists won, and Franco took control of Spain.[1]

Retrieved from "https://marvel.fandom.com/wiki/Spanish_Civil_War?oldid=5367947"
Community content is available under CC-BY-SA unless otherwise noted.