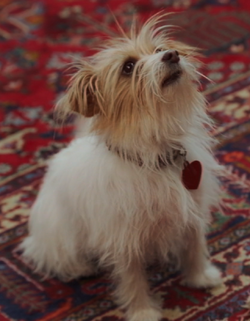 Sparky was a stray dog taken in by Billy and Tommy Maximoff while part of the Maximoff Anomaly enveloping Westview, New Jersey. On the same day that Sparky was adopted he was killed by Agatha Harkness,[1] who alleged that the dog had eaten the azaleas in her front yard while unsupervised after running away from home. When Billy, Tommy and their mother Wanda went out looking for Sparky, Agatha enveloped Sparky's body in a cloth and handed it over to the two children, and explained the dog's supposedly incidental death. Despite the children's urging, Wanda refused to use her magic powers to bring their pet back. Afterward, the kid's father, Vision, buried Sparky in their backyard.[2]

Like this? Let us know!
Retrieved from "https://marvel.fandom.com/wiki/Sparky_(Earth-199999)?oldid=6131692"
Community content is available under CC-BY-SA unless otherwise noted.