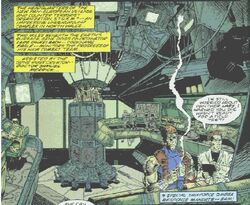 The origins of S.T.O.R.M. are unrevealed. It was allegedly unknown even to RCX (Resources Control eXecutive), a contemporary British intelligence agency. It was engaged in a never-ending, clandestine war against super-terrorism.

They first organized the group Team Omega to serve as their elite counter terrorist squad, serving under Eagle were slaughtered by some unidentified creature while on a mission in the Congo. Eagle brought them all back to S.T.O.R.M. Central, where Dr. Merrick saved them with his Gene Match device. The Team was mutated by process and after recovery and training, continued to serve S.T.O.R.M. as the Gene Dogs.[1]

Retrieved from "https://marvel.fandom.com/wiki/Special_Task_Force_Omega_Response_Mandate_(Earth-616)?oldid=5550661"
Community content is available under CC-BY-SA unless otherwise noted.