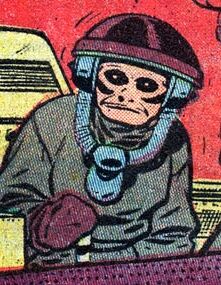 The Spheroids race are an alien race unique to Earth-5106 who dewell in the Sphero regions of space. Not much is known about their race. In the year 2000 a group of renegade Spheroids were pursued in space by the Space Squadron peace keeping force. Most of the fleet was destroyed when they crashed into the Uranosian scientist Tombalo's Electro-Arc. The remaining ship of renegades then surrendered to the Space Squadron to avoid their own destruction[1].

The Spheroids appear to have developed interplanetary space travel technology. The exact extent of their technological prowess is unknown.

Like this? Let us know!
Retrieved from "https://marvel.fandom.com/wiki/Spheroids?oldid=4868599"
Community content is available under CC-BY-SA unless otherwise noted.