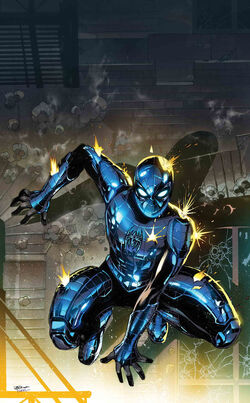 When the New Enforcers attacked New York using high caliber fire-arms, Spider-Man created a suit of "Spider-Armor". Composed of a pseudo-metallic compound Peter Parker developed at Empire State University, the suit slowed him down and made him less agile, but allowed him to be bullet proof. During the battle, the suit was shattered by a cold blast from Thermite.[1]

Like this? Let us know!
Retrieved from "https://marvel.fandom.com/wiki/Spider-Armor_MK_I?oldid=6464367"
Community content is available under CC-BY-SA unless otherwise noted.