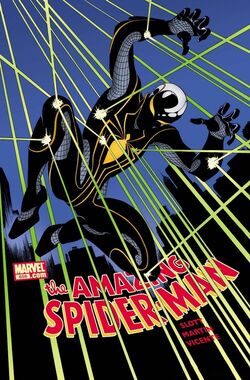 Peter created a second version of his Spider-Armor to compensate for the loss of his Spider-Sense, due to the fact that without this ability, he can be easily wounded by bullets.[1]

The suit was used in combat against the mass murderer, Massacre had kidnapped multiple hostages. The suit, which was bullet-proof, allowed him to easily defeat Massacre and the magnetic webbing prevented the villain from remotely activating any traps.

This suit has since been placed back in storage in Peter's office at Horizon Labs.[2] After Horizon Labs was destroyed,[3] a replica of the suit was stored in Parker Industries.[4]

Retrieved from "https://marvel.fandom.com/wiki/Spider-Armor_MK_II?oldid=5994088"
Community content is available under CC-BY-SA unless otherwise noted.