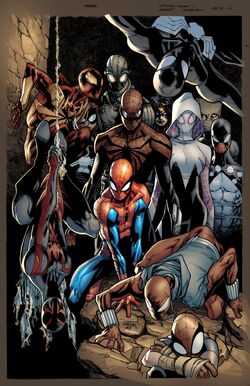 If The Spiders are being destroyed, it might be for a truly sinister purpose. Therefore, Spider-UK, I charge you with this mission: Find Them. Keep them safe. And put an end to this slaughter.

While surveying the Multiverse, Captain Britain Corpsman Spider-UK came across the Inheritors slaughtering Spider-Totems. He told his superiors of the chaos and was sent to protect the spiders and stop the Inheritors.[2]

Billy eventually made his way to Earth-13, where Spider-Man was still bonded to the Captain Universe power. Since he believed the Inheritors wouldn't dare fight someone with the powers of a god, Spider-UK found a safe haven for his team.[3]

When Inheritor member Daemos went to Earth-616 to kill the Mainstream Scarlet Spider, the Spiders were able to add all of 616's Spider-Totems to their team. They were especially happy to recruit Mainstream Spider-Man, who they made their leader due to him killing Morlun twice in the past.[3]

Later, the team were confronted by another team of Spider-Totems hoping to recruit them into their ranks. It didn't go well due to their leader, the Superior Spider-Man's demeanor. To make matters worse, Scarlet Spider and Silk couldn't be masked by Otto's Cloaking Device. As a result, Daemos found them.

Despite the loss of Otto's agent Spider-Cyborg, the combined teams killed Daemos. During a heated argument between Otto and Old Man Spider, Daemos reappeared accompanied by his siblings, Brix and Bora. The teams, outmatched, retreated to Earth-13. There, Otto quickly merged the two teams under his command.[4]

However, Mainstream Spidey argued that Otto was too ruthless to be leader. Peter punched him in the face, prompting a fight. After Otto was defeated, Peter convinced him that they should work together under Peter's leadership. After conversing with the Spiders away on missions, he left to help the injured Spider-Man Noir, but not before sending Miles Morales and Spider-Man of Earth-12041 to recruit more members.

While they were gone, Earth-13 was attacked by the Inheritors. To show that they shouldn't have ambushed them, Captain Universe easily killed Jennix. Despite this, Solus was able to kill Captain Universe. In a moment of panic, Morlun was able to snatch the totem known as Scion: Benjy Parker![5]

Believing that Solus was weakened by the excess energy, the team randomly attacked Solus, causing them to lose the Prince of Arachne and Arachnosaur. During the confusion, Morlun was able take Benjy back to Earth-001 with Spider-Girl failing to stop him.

Spider-UK called Mainstream Spider-Man to come back, and Peter, Gwen, and Anya returned with three Japanese Spiders: Mangaverse Spider-Man, Spider-Man J, and Supaidāman and his giant robot. Unfortunately, Leopardon stood no chance and was easily defeated by Solus. The team then retreated to a random Earth.

While checking on the Spiders away on missions, Jennix revealed that he had hacked their communication systems and had sent their location to his sister Verna. She and her Hounds attacked the Spiders.

During the battle, Mainstream Spider-Woman sent over scrolls given to her from the Master Weaver, explaining the Inheritors plans to Mainstream Spidey. Moments later, Silk contacted him and told him to come to her location.

Arriving on Earth-3145, where the Inheritors can't follow since it was irradiated, the Spiders followed webbed arrows drawn by Silk to their new safe zone: Sims Tower. Inside was Ben Parker, this world's totem.[6]

The away groups were able to destroy the Inheritors' cloning facility and their ability to listen in on the Spiders.[7] Unfortunately, The Scion, The Bride, and The Other all made their way to Loomworld. Kaine transformed into his "The Other" form in rage from Ben Reilly's death and killed Solus. This left the Inheritors with more purpose, but in panic.[8]

The scrolls revealed the motives of Karn and the Mainstream Spider-Girl lead a team to recruit Karn. Although skeptical at first, Karn joined them in hopes of living his life on his terms.[9]

With the Inheritors capable of perfoming the ritual, the Spider-Army teleported to Loomworld.[8] Spider-Man and the Spider-Army managed to interrupt the ritual the Inheritors were performing. Morlun cornered Spider-Man, and started feeding off his essence when Peter used his wrist teleporter to transport himself and Morlun to the lethally radioactive New York of Earth-3145. Silk recovered Peter while leaving Morlun there. The rest of the Inheritors were also brought to Earth-3145 after being defeated. Spider-Man gave them the knowledge of the shelter in Sims Tower, in order not to let them die.

With the Inheritors dealt with, the spider-totems were no longer under risk. However, Otto Octavius had killed the Master Weaver, the controller of the Web of Life and Destiny, for which each Spider-Men could no longer go home using their teleporters.[10]

As Spider-UK was using his own teleporter to open portals to another realities, Octavius started destroying the Web of Life and Destiny, in an attempt to free himself from the future he had in store for. The Spider-Men of Earth-616 united forces to take him down. By reading the inscription in Morlun's dagger, it was discovered another Spider could replace the Master Weaver. Karn, who had enough spider essence to act like one, decided to become the new Master Weaver. With a new Master Weaver in place, the Web of Life and Destiny was restored, and Octavius was sent back to his past, losing the memory of the most recent events in the process. With no more problems to confront, Spider-Man and the rest of the spiders were sent back home.[11]

When the Superior Octopus fused the Jackal's and Jennix's technology in order to create new clone bodies to himself,[12] Web-Warriors feared the Inheritors would return. This proves to be true, as they have been senting Spider-Bots to monitor them, the Inheritors destroyed those bots[13] and used their technology to hack the cloning tubes and make their triumphant return.[14]

Verna would get Spider-Gwen's Dimensional Travel Watch and trap her in another dimension while the Spider-UK and The Spider-Man would be killed. They were forced to retreat and explode the lab in order to destroy the cloning tubes. In order to win, they would get other Spider-People trough the Multiverse, but, while vulnerable, Karn would be absorbed by Verna, because his time as the Master Weaver has made him a Spider-Totem.[15]

While the Spider-Army was assembling it's own team, Superior Octopus (who now returned as the Superior Spider-Man) was too, people who would agre to kill the Inheritors. Miles contacted Otto's team and planned an attack agains't the Inheritors but Otto disagreed. Some of the Superior Spider-Army were forced to rescue them, being trapped at the universe of the deceased Cosmic Spider-Man.[16]

Meanwhile, the Inheritors were planing to bring their father back, using the Jackal's cloning technology. They managed to create a clone body to him, but without the crystal containing his soul, it would be just an empty shell. So they sent Verna after it, but the Superior Spider-Army also sent their team after it in order to avoid Solus' return. The only problem to her is that it was at Earth-3145, the same radioactive Earth the Inheritors were trapped. She succumbed to the radiation, but was able to sent Spider-Woman and the crystal at the Inheritors' base.[17]

Having now the Crystal, they could finally bring their father back to life. Both the Spider-Armys decided to drain the cosmic lifeforce of Earth-13 to summon Earth-616's Captain Universe and face them, with Miles Morales becoming it's host. Spider-Nor-Man would destroy the Web of Life and Destiny, since he believed it would be a better plan to trap the Inheritors in Earth-616, making it impossible to travel between dimension.[18]

However, Spider-Gwen acquired this ability while in the dimension she was trapped in,[19] recruiting as many spider-people as she could, including the Mainstream Peter Parker, after his big fight with Morlun, leaving his enemy out of the final battle it was to come.[20] Despite the destruction of the Web of Life and Destiny, Spiderling, Spider-Girl of Earth-616 and Spider-Woman of Earth-982 managed to create mystical armors with the Web to avoid being consumed.[21]

Otto pretended to give Ben Reilly, the former Jackal, to the Inheritors, since Jennix would consume him and, because of the many times Ben died and was revived, it would destroy "his maniacal mind". Solus finally returned but his return was short lived since killed by Miles, now with the power of the Captain Universe, using the sword vigor because Earth-616's Peter told the group to follow Otto's lead when he arrived thanks to Spider-Gwen. With Solus killed and the Inheritors beaten, the Spider-People created new clone baby bodies to them with no memory of their past life when it was revealed their hunger could be reversed and Solus put it in them so he wouldn't be the only monster. They would be adopted by Spider-Ma'am, an alternate version of Aunt May. Morlun's final fate remains unknown. Now, the Spider-People would return to their dimensions,[22] however, Gwen would later talk about Spider-UK's and The Spider-Man's deaths to their relatives and friends.[23]

Retrieved from "https://marvel.fandom.com/wiki/Spider-Army_(Multiverse)?oldid=6128672"
Community content is available under CC-BY-SA unless otherwise noted.