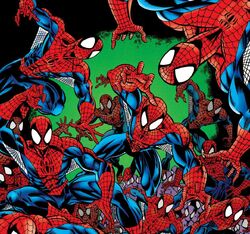 The Spider-Clones were a disposable army of clones of Spider-Man created by the Jackal to kill Ben Reilly.[1] They pursued Ben through the Jackal's lab and into the street outside, where they were confronted by their fellow clone, Kaine.

Together, Ben and Kaine battled the clone army, as Ben tried futilely to reason with the clones. He and Kaine soon realized the clones were unstable, degenerating and collapsing as the battle continued. When Ben unmasked one of the dying clones, he found only a faceless mass of flesh that quickly dissolved.[2]

Like this? Let us know!
Retrieved from "https://marvel.fandom.com/wiki/Spider-Clones_(Earth-616)?oldid=6031305"
Community content is available under CC-BY-SA unless otherwise noted.